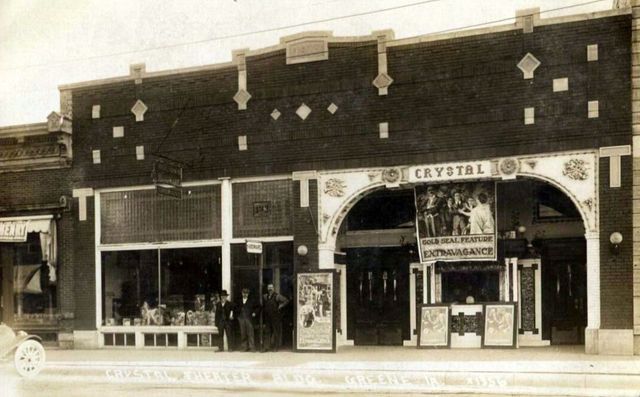 The Crystal Theatre was opened by 1913. It was later renamed Greene Theatre. The theatre building is now the Mercy Family Clinic.

Here’s an item datelined Greene, Iowa, from the May 11, 1957, issue of Boxoffice Magazine: “Mr. and Mrs. Russell Meyers have purchased the theatre building here from Floyd Ramker, local building contractor, and will move the Gamble store to the theatre location as soon as extensive remodeling is completed.”

The Ingalls' Opera House was at 205 North 2nd St. and was transformed into a recreation center and then a farm implement store in the 1940s. The Crystal / Greene Theatre was at a different location listed above.

The earliest mention of the Crystal I’ve found in the trade journals so far is this item from Motion Picture News of July 13, 1929:

“Harry Gottlieb, salesman for M-G-M has bought the Crystal at Greene, Iowa. This house was formerly owned by Amos Engalls [sic] who will devote his time to his print shop at Greene.”

Amos Ingalls was publisher of The Greene County Recorder at least as early as 1910. I don’t know when Mr. Ingalls began operating the Crystal, but both the Crystal and the Opera House were mentioned in the March 17, 1915, issue of the Recorder, and the Crystal had been mentioned in the paper in early 1914.

Interestingly, the web site Iowa Opera Houses lists the Opera House in Green as Ingalls' Opera House from around 1914 to 1924. Mr. Ingalls was a busy fellow. He also did a stint as Greene’s postmaster.

I found another photo of the Crystal at Twitter. The building had 1913 on its parapet, so that was probably the opening year.

As dallasmovietheaters noted in an earlier comment, the Crystal Theatre on Traer Street and Ingall’s Opera House on N. Second Street were two different theaters. Both were in operation under those names during the period 1914-1921. The Opera house was an older building, in operation at least as early as 1909, but the Crystal was apparently newly built in 1913. Both were ground floor houses, but the Opera House probably had a flat floor, as the local newspaper mentions dances being held there frequently.

GREENE, IOWA – A modernistic marquee was hung at the Greene here last weekend, replacing the old-style canopy sign. The marquee, which extends horizontally from the theatre front, has neon lettering showing the current attraction on each side in five-inch characters. Mayor Robert Hessel, owner of the theatre, plans to redecorate the entire building in the spring.