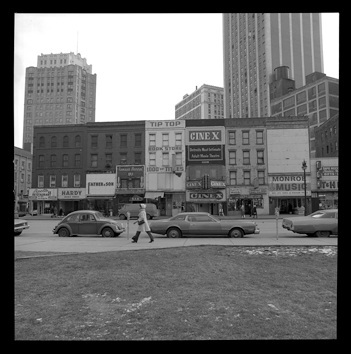 Originally a restaurant, the Cent Odeon opened March 5, 1906 as a nickelodeon, not long after the city’s first nickelodeon, just down Monroe Street, Detroit’s first theater row. Designed by the firm of Mildner and Eisen, it could seat 314.

In 1908, it was renamed the Bijou Theatre, and its auditorium moved from the second to the first floor during a remodeling of the interior.

Over the decades, as the city’s movie houses moved from Monroe Street to Grand Circus Park, along Woodward Boulevard, the Bijou Theatre continued to thrive. It graduated to feature films, to sound films, and finally to widescreen films.

In 1966, it received another new name, the New Gayety Theatre, and in two years, yet another name, the Ciné X, when it switched to pornographic films.

The theater closed in the mid-1970’s, having one of the longest runs of any of the downtown theaters. It has since been demolished.

A March, 1914, item in The Moving Picture World has a different address for a Bijou Theatre that was still upstairs:

“Three upstairs theaters — the Jewel, 30 Michigan avenue; the Bijou, 24 Monroe avenue; and the Avenue, 996 Michigan avenue — in Detroit were ordered closed by the state fire marshal.”