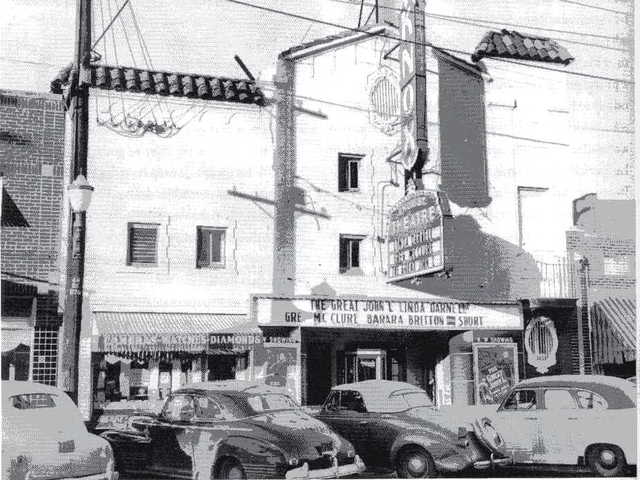 The Ronile Theatre opened on August 1, 1922. It was renamed Knox Street Theater which opened on July 15, 1932 with Johnny Weismuller in “Tarzan, the Ape Man”. By 1941 it was operated by Paramount Pictures Inc. through their subsidiary Hoblitzelle & O'Donnell. It was still in operation in 1950, and by that time was known as the Knox Theater. Between 1971 and 1973 it operated as an adult cinema known as the Knox Street Cinema.

Chuck, I sure don’t. Sorry.

Passing along some info I received from Ms Jeanette (Tomato Lady) on this Theatre……… here are the correct facts on first the Ronile which opened August 1, 1922 at 7PM showing Saturday Night, a Cecil B. deMille movie at 3220 Knox. There is a 1924 photo looking east with a pharmacy on the left, then the Ronile next door but the telephone pole blocks the vertical. The Knox Street Theatre opened July 15, 1932 showing Johnny Weismuller (sp) in Tarzan the Ape Man. It had changed hands a few times. Closed in 1952, but then it still showed up at the same address in 1956, Nov. of 1957, 58, 59 and the owner was Beruch Lumet who lived at 4616 Cole. In 1961 he also owned the Lumet School of Acting. This info came from Dallas Times Herald articles. In the Dallas directory by 1962 through 1965 there was no listing and the building was vacant. Then in the 1970s the Allyson Wonderland was in the building, the front of which had been remodeled kind of colored stripes as in Danny’s 1971 photo. Also Phantasmagoria (sp.) was a disco club in it during those years if you look up that bit. Also some time about 1936, it was sold to Interstate. The theatre had originally been one screen with about 500 seats. In 1972 Paul contacted a man named Mr. Roberdeaux offering to lease it and have it as a movie house once again but they couldn’t come to terms and Roberdeaux died.

The March 16, 2013 post is probably all that one needs. But just filling in some details that may or may not be of interest: In the fifty-plus year history of the Ro-Nile/Knox Theater, it starts with film and ends with film. And it has live stage and concerts in between. A few highlights:

The Ro-Nile Theater Building was instituted by the Ro-Nile Amusement Company on Aug. 1, 1922 in Highland Park with a Minusa Screen with a jinxed J.D. Wheelan organ. Unfortunately, J.D. Wheelan, himself, was severely burned on April 21, 1923 when an explosion occurred while repairing the organ. One week later on April 28, 1923 before repairs were completed, a second fire destroyed the front end of the theater and the balcony. In 1930, the organ struck again taking a customer’s life when he reached in to get some coins but standing water in the organ pit helped to cause the patron’s electrocution. The Ro-Nile fulfilled a ten year lease and shut down.

Robert Z. Glass acquired the Ro-Nile and christened it the Knox Street Theater beginning in July 1932. Within a year, he bought the Parkway and renamed it the Lawn. He then sued Interstate Theaters for what amounted to a price fixing case. In 1936, Glass had labor issue and stink bombs were thrown into both his Knox Street and Lawn theaters. Glass sold the theater along with the Lawn shortly thereafter becoming part of the Interstate Circuit. During the Paramount consent decree, Interstate divested itself of many theaters in the early 1950s. They simply closed the Knox on January 7, 1950 with “The Doctor and the Girl.” Interstate tried to lease it to a live stage theater group but that apparently failed as on May 18, 1951 father/son team Leo and Richard Craiker took on the Knox Theater as an indy for a year calling it the “home of encores.” That works out to a twenty year lease ending the Knox' film exhibition for some time.

The Knox St. became a live stage and school for acting. The next operators were: The Dallas Institute of Performing Arts / Knox Street Theatre (1953-1956); Lumet School of Acting / Knox Street Theater (1957-1960); Pearl Chappell Playhouse (1961-1963); Speakeasy (1965-6); The In Crowd (1966-7) which was sued for its name and thusly changed; Phantasmagoria (1967-1969); Allison Wonderland (1970); and finally back into film exhibition with the adult X-rated house Knox St. Cinema (1971-1973). The Ro-Nile Theater Building was deconstructed/reconstructed for retail space that was still vibrant in the 2010s. And the Knox’s 50-year plus exhibition era along with the H.P. Village Theater and Varsity/Fine Arts/Park Cities Playhouse 50-plus years meant that all three Park Cities suburban theaters had performance lifespans in excess of fifty years.

MELenns – what a crock… you have about a dozen sockpuppets and you’ve been going around for ages doing this sort of thing. Show absolute proof there was ever such a thing as the AllisonWonderland Concert Lightshow — that one could actually go to, pay for entrance, and order a peanut butter and jelly sandwich from 29 jellies and 4 nut butters.

Hey ***SPV – Actually, the number of sockpuppets number in the hundreds.

As for proof of the existence of the AllisonWonderland Concert Lightshow, click here:

Also, I have one of Allison’s concert posters where he was performing with Seals & Crofts, and JJ Cale in San Antonio, at Laurie Auditorium, at Trinity University. I’ll have to take a picture of it to post. Will do that ASAP. Watch for it.

As to the reality of the AllisonWonderland Concert Lightshow, one only has to read previous posts to this thread to see that the Knox Street Theater was, in the early ‘70s, occupied by AllisonWonderland, but, knowing YOU, this would entail your having to first learn how to read.

BUT, I must comment on the quality of your writing and the improvement that having passed on has made. And knowing YOU, am wondering how you are enduring the fire and brimstone there at your eternal home?

Rest assured that I will alert Mr. Allison to your post. He and I have often discussed how he used to “get your goats” on the old UseNet NewsGroups <alt.solipsism> and <alt.consciousness-4th-way>.

Anyway, nice to hear from you again. You take care, you heah?

And as Mr. Allison would say: “Beware the Obvious, Suspect the Reality”, and then he would add: “Heh heh heh, not genuine without this chuckle.”

1932 photo added courtesy of Stella Simms via the Traces Of Texas Facebook page.

I used to live on Travis in that time and often went to AllisonWonderland. I liked watching the old Captain Video series. BTW, if anyone knows where those old reels are, I think I read that the CV archive would like them…

BTW, front row was not chairs but bean bags.