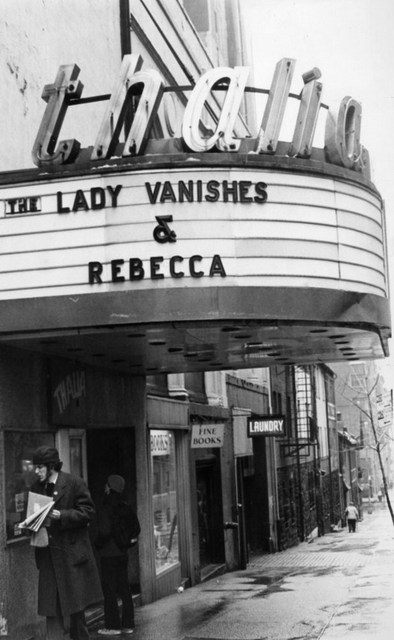 This classic art house opened in 1931 as a 299-seat neighborhood movie house on Manhattan’s Upper West Side.

By the 1960’s, the Thalia Theatre had become an intellectual staple for the community (and even appeared in Woody Allen’s “Annie Hall”) . It remained popular until it closed in 1987.

The Thalia opened a lower Manhattan theater (called the Thalia SOHO) to satisfy the need for indie and art house pictures, but it found little success and eventually closed.

Today, Symphony Space, an arts and cultural organization is bringing the Thalia Theatre back to life by incorporating the old theater into its newly redesigned complex.

I was wondering if anyone has an old Thalia Theater program that can be scanned and emailed to me. Thanks

I have fond memories of the Thalia theater. It was located on ninety fifth street around the corner from the Symphony theater, which was on Broadway. I frequented both these movie houses as a teenager. The Symphony showed mostly English films and many old classics. The Thalia showed mostly foreign films and some silent movies, too. I was enthralled with all of them and I learned so much about life and the world from them. I usually went by myself, because most of my friends were not interested in those films. It was not unusual to be sitting next to a celebrity, in the Thalia. I remember seeing Tony Randall and many other actors in that theater and around that area. Our neighborhood was full of people from the stage and screen. Sometimes, when I still walk past that corner I get a sense of loss when I don’t see the little Thalia, tucked in among the dull towering buildings. I know that the Symphony is still providing some civilized entertainment, with book readings, but my old celluloid friends are all gone and I miss them. Now, in the twilight of my life, I often wonder if the wrecking ball really was a good thing.

Thank you for all your comments. I am the daughter of the Martin and Ursula Lewis, who ran the Thalia and programmed all the films there from the 1930s to 1973. This was truly its heyday.

debsutherland: Do you have a copy of the summer movie list from the 50’s/early 60’s. It had wonderful double features of the best movies ever. It was printed on large heavy paper that was folded into a compact size. If you do I would love to see a copy of the same. Bob OBrien. I can be reached at; Thanks.

I am the grandson of Martin and Ursula Lewis – who ran the Thalia from its beginning until the 70s. If anyone has copies of any programs (scanned) of the Thalia from its heydey, would it be possible to email them to me? Trying to learn more about the history. Many thanks for any help! Please let me know if this might be possible!

I’ve just published a book on the repertory movie theaters in NYC, 1960-94. One of the chapters is devoted to the Thalia under Martin and Ursula Lewis. Thanks to their children—John and Tom Lewis and Deborah Sutherland—who gave me a copy of Mrs. Lewis’s unpublished memoir and photos of the two, I was able to fill in huge gaps in their histories as well as the history of the Thalia. The book, Repertory Movie Theaters of New York City: Havens for Revivals, Indies and the Avant-Garde, 1960-1994, was published by McFarland Publishers, mcfarlandpub.com, and can be obtained through their website or Amazon.

My Mother would take me to the Thalia, in the late 1950s I was maybe 10 or 11 yrs old I remember all the movies we saw the Blue Angel with May Britt, Anna Lucasta with Eartha Kitt, La Strada, Rififi, how many of them were actually at the Thalia I don’t remember BUT I remember the #1 local to I guess 96 th St? And I remember a hill, AND I do remember that I loved reading sub-titles unlike my siblings who couldn’t care less, I LOVED the movies..still do, always will..so my fondest memories are of accompanying her to Centre St someplace to get her Cabaret Card..the cops would issue them, and you couldn’t work without one, and then Chinese food or movies ..or BOTH..sometimes Times Sq..the Empire, or one of the big movie houses or UP to the Thalia..New York was like Hollywood to me..great place to be a kid….

I am interested in contacting Debsutherland or Dantl7, all descendants of Martin Lewis. I was in touch with a member of your family on an old computer and learned a good deal about your uncle/granduncle Hans Lewy, professor in Jerusalem, who died in 1945. I am part of an academic group planning an event in Lewy’s memory and would like to regain contact with family members. Thanks .il