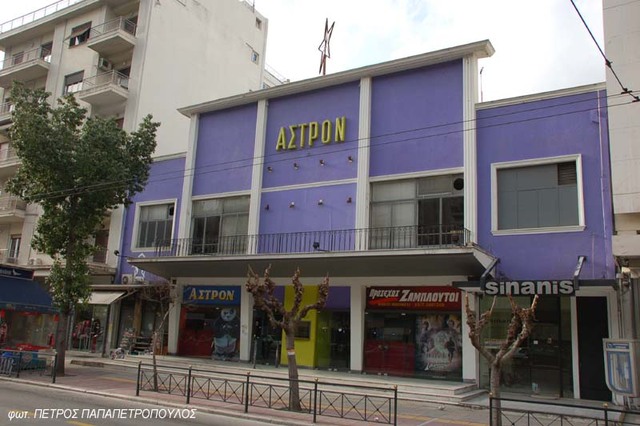 Located on Kifisias Avenue, in the Ampelokipoi distict, to the north-west of the city centre. The Astron Cinema represents the new generation of purpose-built cinemas at the center of Athens in the 1950’s. It opened its doors on January 1957 with 1,074 seats (663 at the ground floor and 411 at the balcony). Designed in the Art Moderne style by the well-known Greek architect Solon Kidoniatis, it is much acclaimed for its grandiose staircase, spacious foyer and the uncommonly elongated balcony.

In 2008 its current owner (Sinegiitiko Kefalaio Chrimatistiriakon Sinalagon) closed it down and sells the lot. A handful of active neighbours are collecting signatures at the Astron Petition below, and try to persuade the Ministry of Culture about its architectural merits and the need to be preserved.

On Thursday the 7th of July 2011, the preservation of Astron cinema was discussed by the Central Council of Newer Monuments at the Ministry of Culture. Although four members of the Council voted for and four members against the preservation of the cinema, the final negative decision with marginal majority relied on the double vote of the chairman of the Council, an old practice which has been abandoned since 2008! Considering Aston’s architectural and cultural merits, the fact that it is one of the last six purpose-built cinemas of Athens, the Ministry of Culture should re-examine its final decision.