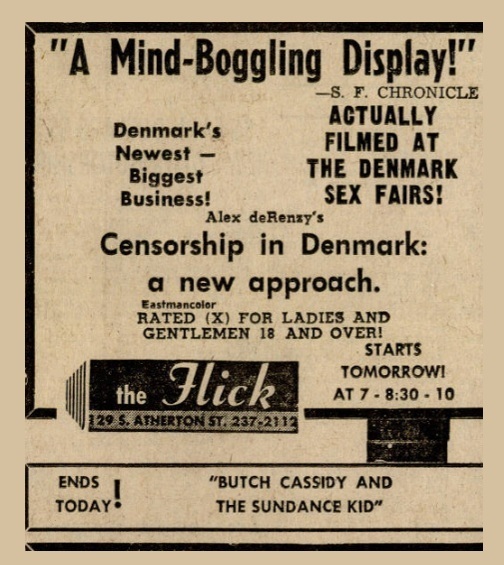 This was a very small theater that looks to have been converted from retail. It was opened on December 31, 1965 as the Twelvetrees Theater and closed on July 24, 1970.

It reopened as the Flick Theater on September 23, 1970 and closed in June or July 1986 and was demolished later that year.

I went to ONE movie there. It sort of had a reputation for being a bit rundown and showing 2nd run stuff. I must have missed its “glory days” as an “art house” theater. The only film I ever saw there was “Popeye”. So that must have been Dec of 1980.

I was a PSU student in the mid-70s and worked there as a projectioninst a couple of times. As I recall, I trained in the booth there as an apprentice in order to test for my projectionist license in Harrisburg. There were red drapes masking the screen that no longer opened and closed. The Century projectors gave a good-quality presentation. It never really looked like a movie theater from the outside.

I caught the tail-end of its “art house” days; I remember seeing a couple of Lina Wertmuller films there in the mid-70s. There were dollar matinees in most of the downtown theaters in those days, and I saw a phenomenal number of movies during that fertile period for filmmakers. Digital projection and stadium seating are nice, but I miss the single-screen storefront theaters – no matter how compromised the space and/or the equipment.

When it was still called the Twelvetrees, I made the mistake of first seeing “2001: A Space Odyssey” there on the tiny screen. (The film played much better a few years later when I saw it at the Cathaum.) The Twelvetrees was a better theater for old W.C. Fields and Laurel and Hardy films, which I also saw there, in October 1969.

Associated Theaters acquired the Twelvetrees during the summer of 1970, remodeled the theater, and renamed it The Flick. It reopened in September, at the start of the Fall 1970 term, with its first feature being Elliott Gould’s “Getting Straight.” New seats were installed in early September 1972.

i managed Twelvetrees from 1966 until 1968. Remember the huge photo of Chaplin that hung in lobby?Our offerings were varied – we did offer foreign films that the two chains in town wouldn’t touch – Fellini, Bergman, Truffaut. We also offered classic American and foreign films, and we offered films that deserved a second look. Two of the owners were professors from the film department at Penn State, so the three of us had the opportunity to develop a great lineup of films. It was a great experience. and it was sad to see it sold. The fact that it was so successful was comforting to all of us, but we knew the chain that bought the theatre lacked the grasp of what made us so successful.

I was the District Manager for the theatres in Altoona and State College at the time of the transition in ownership from the Schlow family to Associated Theatres. I was also friends with several members of the Schlow family. In any case, I was always impressed by the Twelvetrees and it’s film policy. Martha (Marty) Schlow actually offered the theatre to me first. I was too young (shortsighted?)and poor, at the time to buy it. I was told the alternative would be to sell off the larger building that housed the Twelvetrees for non-theatrical use. Rather than see the theatre disappear all together, I told my bosses (Associated Theatres) about the availability of the the theatre. A deal was made and I was told that I would have a major role in programming and policy. Alas, that was never true. I didn’t like or agree with the name change to beghin with. I did manage to get a few good films in The Flick and some classics. Alas, the main bill o' fare was second run and even some bad X-rated junk. I got a lot of heat from the town about the films at the Flick. As Twelvetrees, the theatre was an important part of State College. I’m sure those who remember it do so with fondness for what Twelvetrees was and not for what it became.

State College has changed a great deal; but, I still miss living there. The great theatres of State College are gone, i.e. The Catham, Cinemas, The Movies, and even the Nittany AND Twelvetrees. Thank goodness the State is still there. “Those were the days” where fond memories live. I hope you are well Merle :–) ——-Jack O.

This opened as Twelvetrees Cinemas on December 31st, 1965 and closed on July 24th, 1970. It reopened on September 23rd, 1970 by Associated theatres as The Flick. Grand opening ads posted. 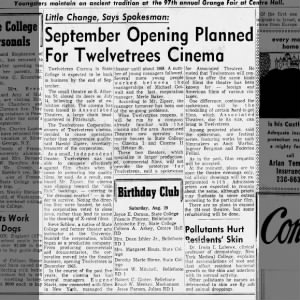