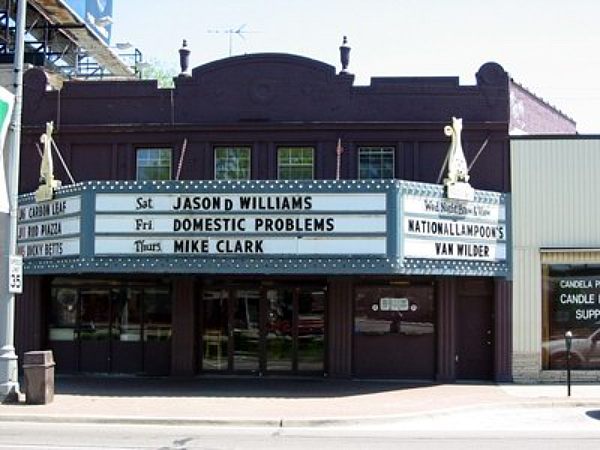 Opened in 1921 as the Ferndale Theatre, this 425-seat theater was renamed the Studio North in 1961. Not long after it switched its name, it began screen art house and independent films, which continued until around 1976. It then switched to adult films. For years, its owners, the city of Ferndale and Oakland County were involved in legal battles, over charges of prostitution as well as various other charges, and in 1989, the city of Ferndale finally succeded in shutting the Studio North down.

In 1991, after an extensive renovation, which also reduced the theater’s seating to 300, it reopened as the Magic Bag Theatre, which features concerts as well as “brew ‘n’ view”-style movie screenings.

Does anyone have any information about the Oakdale Theatre in Hazel Park? It was a neighborhood theatre with a balcony. It has, I believe, been demolished. I have a friend who attended this theatre as a boy. He’s going blind and would love to see a photo of it before he does.

I have never been to the Magic Bag, but I remember this place as the Studio North. The movie “Harold and Maude” played there for like a year and a half around 1973. I attended a showing 2 or 3 times and it had a concert like atmosphere as this was a very special film.

The initial entry that says the theater switched to adult films shortly after the name change in 1961 isn’t quite right. It ran foreign and and smaller/off-beat American films for probably around 15 years as a part of the multi-theater local Studio Theater chain (most of the others had numbers.. Studio-4, etc). In addition to the long Harold & Maude run that RDToo noted, there was an equally long Producers run in the 1960s. I saw a restoration of Chaplin’s Great Dictator there in the mid-seventies. After the Studio chain closed, it changed hands and that was when the porn and legal battles began.

Mid `60’s photo of Woodward Avenue added. The Studio Theatre is in the center. May need to download and enlarge to see fully.

Only live venues listed on website. No movies scheduled.