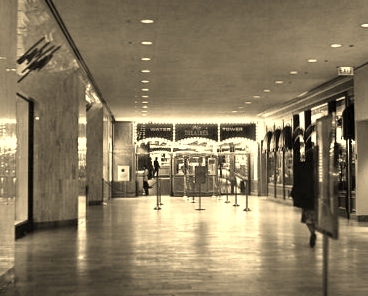 This theatre opened in December 1974 as the Water Tower Place Cinemas. Its original four screens were built on the 2nd floor of the Water Tower Place Mall, at the back of where the hotel is now located, with the address given as 845 N. Michigan Avenue. In April 1984 Screens 5 to 7 were erected by Plitt Theatres on street level on E. Chestnut Street.

In May of 2005, the former 5-7 screens of the movie house on Chestnut Street were reopened after a conversion into a single auditorium seating 549 as the Drury Lane Water Tower Theatre. Like the other Drury Lane Theatre in suburban Oakbrook Terrace, the theatre will present live musical theatre. In September 2010 it was renamed Broadway Playhouse at Water Tower Place and is operated by Broadway in Chicago.

This entry needs to be changed. Drury Lane is no longer at Water Tower. They are solely at Oakbrook now.

This theatre is now known as Broadway Playhouse and it’s run by Broadway in Chicago. It will be closed until September 2010 for renovations. The website at least temporarily is www.broadwayinchicago.com

This theatre reopened in September with Sutton Foster in concert. It currently has the Canadian show TRACES. Broadway in Chicago has other shows scheduled to play here in 2011 including a revised version of WORKING.

The ad in the photo section above is for the opening of the original Water Tower theaters I-IV located inside Water Tower Place. This would have been December of 1976.

I have a ticket stub that I have saved for Water Tower Theatre 3 with an address of 845 N. Michigan Ave. Was this part of the same location? The admission price was $2.00.

Yes, that would be the same (Mall theater) location. When Plitt opened the lower (Street) level theaters in April of ‘84, those were known as 5-7.

If you can, please upload a photo that stub! You saved a piece of history there.

I will scan it as soon as I can and will add it to the photo section.

Thanks for getting back to me.

April 13th, 1984 grand opening ad for the expansion in the photo section.

Newspaper ads from 1980’s have the address as 835 N. Michigan. But newspapers have been known to make mistakes. See newspaper ad in the “Photo” section that I posted.