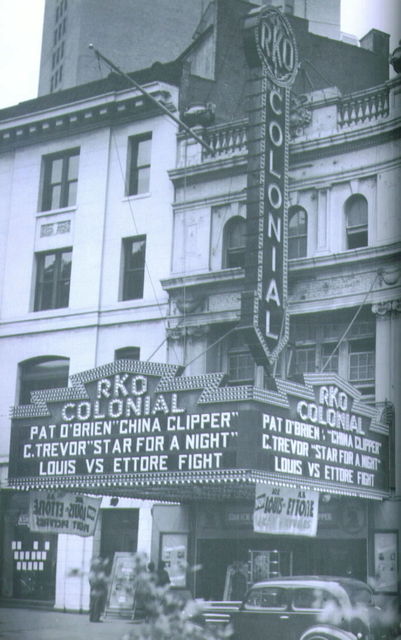 Opened in 1905 as the Colonial Music Hall by Fred Thompson and Elmer Dundy, the same duo behind the Hippodrome Theatre and Luna Park at Coney Island, as a venue for musicals and vaudeville acts.

Designed by architect George Keister, the Colonial Theatre was designed in the style of a Victorian London music hall. Its exterior had a fairly simple yet austere four-story Federalist façade along 62nd Street. The interior had a wide yet not very deep auditorium, which brought the balcony much closer to the stage than many other theatres. Its original color scheme consisted mainly of red and grey, and at the rear of the balcony, was the Japanese Tea Room. The Colonial Theatre could seat nearly 1,300.

Within two months of its opening, Thompson and Dundy sold the theatre to Percy Williams, who dropped legitimate fare in favor of vaudeville only. Williams also had the “Music Hall” portion of the theatre’s name changed to “Theatre” to emphasize the switch in format.

In the early-1920’s, black-themed musical comedies came to the New Colonial Theatre, with such now-racist sounding names as “Little Sambo” and “Chocolate Dandies”. It was during this time that a 1923 show, “Runnin' Wild” introduced the dance craze called the Charleston to America.

In 1925, actor Walter Hampden leased the Colonial Theatre to stage Shakespearean plays, and the theatre was again renamed, as Hampden’s Theatre during his six years there. Programing included occasional movie screenings.

In September 1931, RKO took over, and, as the RKO Colonial Theatre, began showing movies. After years of second-run and double features, RKO sold the theatre to NBC in 1951, and converted it into one of its numerous New York television studios. A decade later, ABC took over, and used the Colonial Theatre mainly for taping game shows until 1971.

Multi-millionaire Rebekah Harkness bought the Colonial Theatre in the early-1970’s, and poured more than $5 million into renovating the theatre for use by her ballet company. It opened in 1974, as the Harkness Theatre, but within weeks, ballet was out, and legitimate theatre back, though only very rarely, as the Harkness Theatre remained dark more than it was lit. Its last act, in 1977, was the native South African revue “Ipi Tombi”, whose partially nude dancers were protested during the entire time of its brief run. (In London, UK, without protests, the show had been a smash hit first at the Cambridge Theatre, then transferring to several other West End theatres).

After closing later the same year, most of the fixtures, including seats, chandeliers, carpeting and artwork, were auctioned off, before the former Colonial Theatre was torn down, to be replaced by condominiums and a public plaza.

This was mentioned by Bob Hope on the Dick Cavett Show DVD.

I visited this theatre twice: for the taping of a Steve Allen show and then, later as the Harkness for the Robber Bridegroom with Barry Bostwick of Rocky Horror (and now “the Voice)fame.

One of the features of the new public area is a rock climbing wall. On the handful of occasions I’ve been past there are actually people trying to climb the wall.

I remember cutting class from HAAREN H.S. just to watch the taping of the DICK CAVETT SHOW at the ABC Colonial Theater; I believe he would tape at 10:30am. At the same theater, I also got to see the taping of DREAM HOUSE, a game show in which contestants would win a house, one room at a time. No tickets needed for either show! I really should have been in school, though. Hey, what can I say – it was fun!

The Colonial showed movies occasionally before the RKO take-over in September 1931.

“Robber Bridegroom” with Patti LuPone, and “So Long 174th St.” were some of the last legit shows. I too saw a taping of “Dream House” on a class trip- if I recall at that time all orch seats were taken out to accomodate cameras, cables, electrics and the like

Wasent the old Miton Berle show broadcast from the Colonial? I also remember seeing a taping of the Jimmy Dean Show back in the 60’s.

The Price Is Right with Bill Cullen originated in color on NBC from the Colonial. NBC and its owner RCA also used the Colonial as a test studio when they were developing color television. When NBC cancelled The Price Is Right in 1963, the show moved to ABC and the Ritz theater, reverting to black and white after several years in color. ABC cancelled the show in 1965 and it moved to Hollywood and CBS in 1972.

Another Eyes of a Generation piece on The Dinah Shore Show at the Colonial Theatre January 13, 1957.

Re my 2009 comment. In those days they had a blue screen process for special effects. Now it’s a green screen. Wonder the when and why of that change.