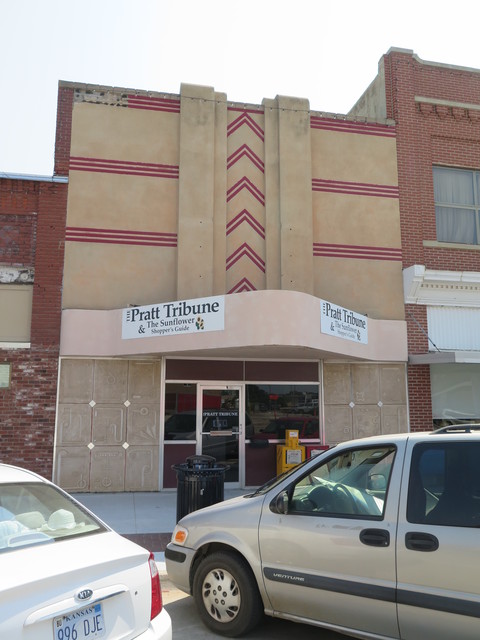 The Kansas Theatre was built in 1940 for Charles Barron, and was located almost directly across the street from his Barron Theatre. The new house was designed in the Art Moderne style by Winfield, Kansas, architect William N. Caton.

In 1944, Barron sold both of his theaters in Pratt to the Commonwealth Amusement circuit. The Kansas Theatre was in operation at least as late as the early-1950’s. Today its building houses the offices of the Pratt Tribune, but its theatrical past is still recognizable in the facade.

Charles Barron had operated an earlier Kansas Theatre in Pratt in the 1920’s. Additional information about either of these theaters would be appreciated.

I found a Boxoffice article about the Kansas which I’d formerly missed because it called the theater the Kansan. It said: “The Kansan, rebuilt into a modern house following the fire last year which destroyed the old Kansan, was opened here last week by Mr. and Mrs. C.H. Barron.” This item also said that the Barrons had been exhibitors in Pratt for more than fifteen years.

The original Kansas Theatre at Pratt dates back to at least 1926, when it was mentioned in the November 20 issue of The Reel Journal, and probably to at least 1924. A January 1, 1944, Boxoffice item said that Barron had been an exhibitor in Pratt for twenty years.
In 1943 Barron sold his theaters in Pratt to Commonwealth Amusement, as reported in the October 28 issue of Boxoffice. He later moved to California, where he died in 1952.