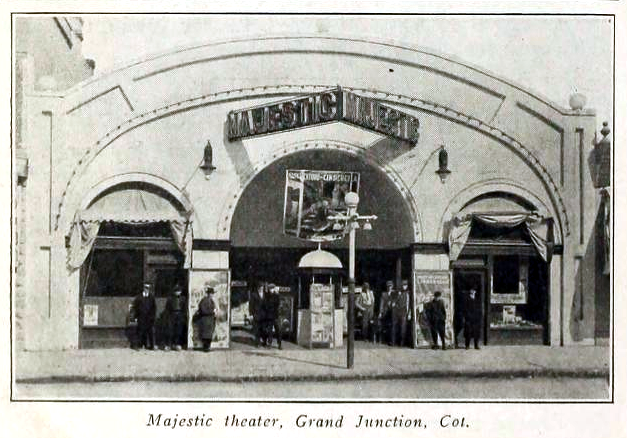 Originally opened as the Majestic Theater prior to 1915. It became the Mesa Theater in 1930. The Mesa Theater was rebuilt and reopened on September 1, 1953 as the New Mesa Theatre with Jane Wyman in “Let’s Do It Again”. It was closed as a movie theatre in 1987. It is currently used as a venue for concerts.

There were apparently two Mesa Theatres at Grand Junction, but there is muddled information about them in Boxoffice Magazine. The January 3, 1948, issue of Boxoffice published a drawing of Westland Theatres' new Chief Theatre, then under construction, and the caption said it was a replacement for the Mesa Theatre, “…which was converted into a store building.” However, the August 21 issue of Boxoffice the same year has an item dateline Grand Junction which says “B.V. Warren, manager of the Mesa Theatre here, was on a three-week vacation….” I’m not sure what to make of that. Maybe it was meant to say “former manager.”

Then there is a report of a Mesa Theatre being built in 1953. The February 21 issue of Boxoffice said that Westland Theatres would build a $150,000 theater to replace the Mesa. A drawing of the new Mesa appeared on the cover of the March 7 issue of Boxoffice. The design was by Boller & Lusk. The caption says that the theatre was being “rebuilt,” suggesting that it might not have been an entirely new building. The drawing does match the photos linked above, though.

Whether the original Mesa was converted to a store in 1948, or continued to operate until it was replaced or rebuilt, the current Mesa must be the house designed by Boller & Lusk in 1953.

It’s probably significant that I haven’t found any later Boxoffice references to a hardtop theater called the Chief, but Westland opened a drive-in called the Chief in 1952. It seems unlikely that they’d have both a hardtop and a drive-in of the same name in the same town. Unless something happened to it within a couple of years of construction, and Boxoffice failed to report it, the 1948 Chief project probably fell through, which means the Mesa probably continued to operate until being rebuilt in 1953. The conversion to a store building was probably only intended rather than accomplished at the time of the Boxoffice report, and the writer of the item must have garbled the information.

The Mesa was originally the Majestic Theatre and dates to about 1915, maybe a bit earlier (I have a postcard of Main St. showing it in 1916). Westland leased the property in the 1930’s and changed the name to the Mesa. They tried to purchase the building but the original owners of the Majestic (and their successive family) didn’t want to sell the real estate. Westland updated and completely restyled the theatre in early 1953. This facade, marquee and interior remains pretty much the same today although it does not show movies and has been converted to a bar and live theatre venue now.

As mentioned Westland did build a Chief in Grand Junction but it was a drive-in. They also built a Chief hard-top on the front range. Interestingly enough the first manager of the GJ Chief had been the manager for the other Chief previously. An entertainment venue has been on the site of the Mesa Theatre since 1885. The text on the marker placed at the site by the Colorado Historical Society reads as follows:

“This building originally housed the Mesa Opera Rink, which opened in 1885. It offered a 300-seat playhouse for live theater, musical, and vaudeville acts. Ballroom dancing was on the large wooden ‘Rink’ floor. In 1907, the front of the building was remodeled, the show house was enlarged to seat 1,000, and it reopened as the Majestic Theater. Some of the first silent films and the first movie with sound in Western Colorado were shown at the Majestic Theatre.

“It was renamed the Mesa Theater in 1930, and in 1953 a complete mid-century remodel brought it up to date with a panoramic screen, stereo sound, and plush seats. It remained open until 1987.”