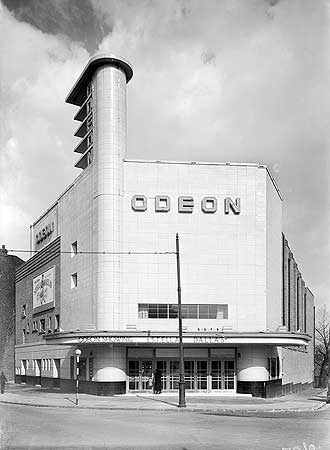 Located in the centre of Erith, a town that today is in the south-east of Greater London. Built for the Oscar Deutsch chain of Odeon Theatres Ltd., the Odeon Theatre was opened on 26th February 1938 with Barbara Stanwyck in "Stella Dallas". Located on the corner of High Street and Avenue Road, the huge frontage was entirely covered in faience tiles, broken only by long narrow window, just above the canopy. To the left of the façade was a striking sweptback 65 feet high fin-tower, which became a landmark in the town centre.

Inside the streamline Art Deco style auditorium, seating was provided for 826 in the stalls and 420 in the circle. On each side of the proscenium were panels with horizontal bands, that were back-lit. There were a series of decorative plaster bands along the ceiling towards the proscenium, which were broken only by a laylight fitting in the centre of the ceiling.

The Odeon was taken over by the independent Classic Cinemas Ltd. chain on 10th December 1967, and was re-named Classic Cinema. From 1971, on Sundays only, it became a Tatler Cinema Club playing uncensored adult films. The Classic Cinema was twinned from 16th September 1973, with a 1,000 seat Mecca Bingo Club operating in the former stalls area, and a 400 seat cinema in the former circle, which opened with Glenda Jackson in "A Touch of Class". Classic Cinemas leased the entire building to Mecca Ltd. from 3rd January 1974, and the cinema was re-named Mecca Cinema.

The Mecca Cinema was closed on 25th September 1976 with Robin Askwith in "Confessions of a Driving Instructor" and Anthony Sharp in "House of Mortal Sin". The building was de-twinned and the Mecca Bingo Club took over the stalls and circle levels from November 1976. In 1995, it was taken over by the independent Jasmine Bingo Club chain, and was closed on 4th February 1996.

The building was boarded-up and lay unused until late-2002, when it was demolished. A block of retail units and flats was built on the site in 2005.

A set of vintage photographs of the Odeon:
View link

Like Penge Odeon, restricted opening began in 1965, with all day films on Monday, Thursday and Saturday. Classic restored full day opening. The Tatler club began in Nov, 1970 but cut back to Sunday afternoons only in July, 1971 and ceased entirely in May, 1973.

Select Developments wanted to preserve the tower and front as they very much liked the way it addressed the roundabout, and Erith lacked many other landmarks. But they discovered it would be impossible to demolish the back of the building without the tower collapsing .