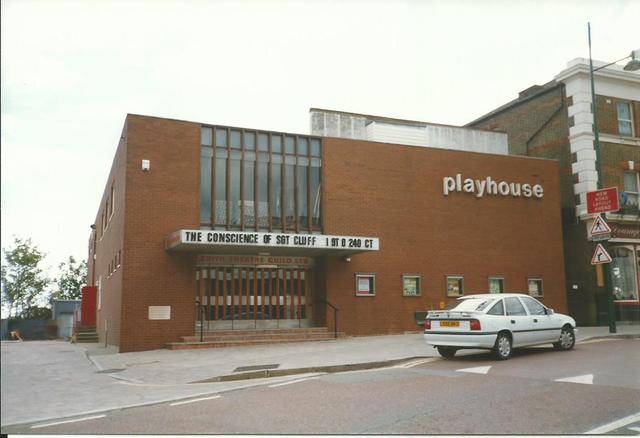 The Oxford Cinema opened on 27th July 1913. It was built for W.T. Collar of the Oxford Picture Theatre Co. and had an elaborate Classical style facade. In 1929 it was taken over by the independent Sydney Bacon Circuit.

The Union Cinemas chain took over the Sydney Bacon Circuit in 1935, and they closed the Oxford Cinema, being surplus to their requirements in the town (they had also taken over the former Picture House/Ritz Cinema).

After the outbrak of World War II in 1939, the building was taken over by Erith Town Council to be used as a furniture store for families who had been bombed out of their homes. After the war in 1946, the by then semi derelict building was leased to the Erith Theatre Guild and permission was granted to convert the building into a playhouse.

Refurbishment work was carried out by members of the Theatre Guild and the Erith Playhouse opened in October 1949. A new scene dock had been built and dressing rooms were added, as well as a new proscenium and stage. Further re-building ocurred in 1973, when a new front of house was created on adjacent land and the original entrance and facade were demolished.

The Erith Playhouse building has now been much altered over the years, but continues to entertain the population, with amateur productions of plays, performed in repertory.