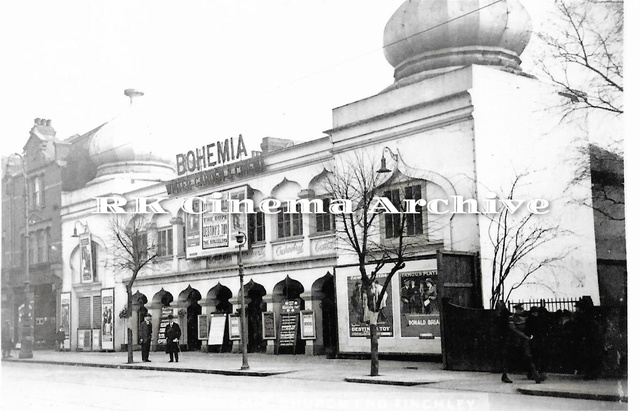 The Alcazar Gardens was opened as a small Victorian pleasure gardens with a Winter Garden Hall. It was located on Ballards Lane between Princes Avenue and Redbourne Avenue in the centre of the north London district of Finchley. From February 1913, the hall was in use as the Alcazar Picture Palace, operated by Alcazar Picture Theatres Ltd.

Some reconstruction was carried out in April 1914, and it was re-named Bohemia Cinema. This was not to last too long as when World War I broke out later in 1914, the building became a manufacturing unit producing observation balloons. It was still listed as a cinema in 1915, but it probably never re-opened. It was converted into office space which continued until 1991. It was demolished in 1994.

In 1920 a New Bohemia Cinema was built and opened on Church End which has its own page on Cinema Treasures.

The auditorium had a segmental barrel-vault ceiling of nine bays with relief decoration to the panels.The plaster moulded proscenium was 38ft wide. The Auditorium was 95ft by 60ft. There was no balcony or projection box. In 1936 the balloon factory closed and the building was converted into offices until it became vacant in 1991. Demolished in 1994 at which time it was still largely intact and still had the remains of the grand staircase.