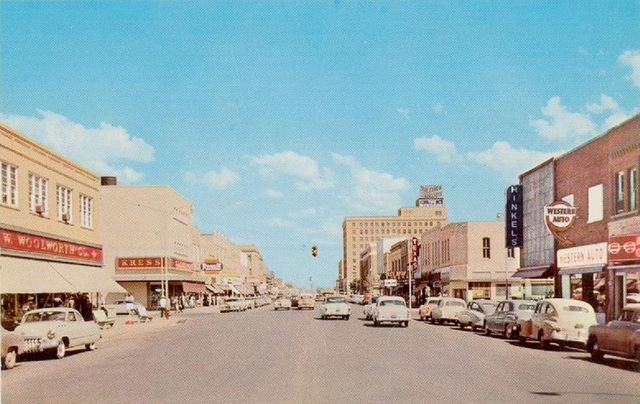 After a soft launch on September 29-30, 1938 of “Wake Up and Live,” the theatre’s gala grand opening was Oct. 1 with Mack Brown’s, “Guns in the Dark.” Nearly ten years later, the theater closed briefly to redecorate and had a grand re-opening on August 15, 1948. To accommodate widescreen, the theater was updated including its “wall to wall screen” on Nov. 28, 1954. Negative publicity hits on Nov. 27, 1959 when it’s revealed that African American patrons have no rest rooms afforded to them.

The city is experiencing a major, coordinated plan to bring urban renewal to downtown in the form of a shopping mall in early 1960. Downtown Abilene Markets, Inc. is acquiring property to build the center. The Texas Theatre’s last showings are February 22, 1960 with “Hound Dog Man” and “The Quiet Gun.” It’s revealed that the Texas Theatre property has been acquired by the Downtown Abilene Markets from the Alexander estate on July 30, 1960. The property is one of the first targeted for demolition in 1960 as the renewal plan commences but doesn’t occur until 1962 according to reports.