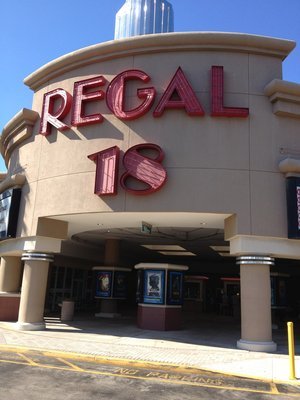 Another early example of Muvico’s "theme" theatres (following the celebrated California Club 6 in North Miami), Delray 10 opened May 7, 1993. Aside from the then-new enhancements of cupholder armrests and Dolby Stereo Digital sound, the lobby resembled a retro-futuristic city square with video screens playing preview trailers, and a miniature zeppelin with twinkling landing lights circling the ceiling.

Regal Cinemas acquired the complex in 1995, as Muvico made preparations for more ambitious megaplexes. Eight additional screens later constructed included several with stadium seating. Mainstream hits and alternative films both found a home there until it was closed in November 2013.

After 20 years in business, the Delray 18 closed abruptly in November 2013. Word had circulated for the better part of the year that L.A. Fitness was poised to take over the space.

Meantime, a new iPic complex is aiming for a 2015 opening not too far north, on the former site of the Delray Beach Library off Atlantic Avenue.

It turns out that most, if not all of the complex has been demolished in order to accommodate the L.A. Fitness. That just makes this theater’s closure even sadder.

This opened on May 7th, 1993. Its grand opening ad is in the photo section.

A bit of interesting trivia- this theater was used as the backdrop for some of Regal’s ticket stubs in the late-90s.