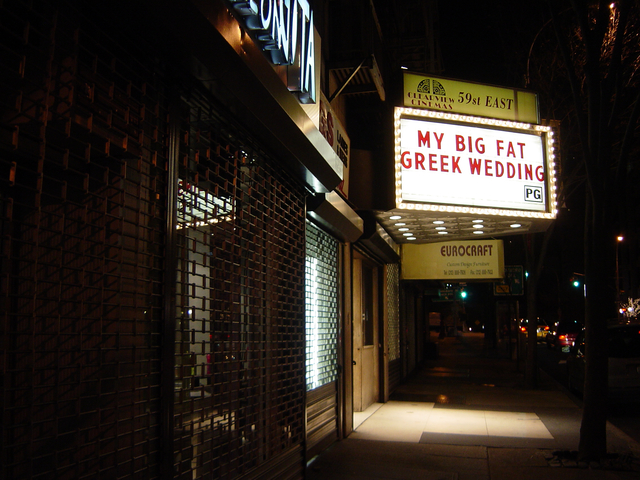 Opened on July 16, 1969 as the Cine Malibu with Daniele Gaubert in “Camille 2000”, it was an art house theatre located in Midtown East, Manhattan. It belonged to a cluster of single, twin, and triplex movie theatres; all of which were within two blocks of each other.

One of many subterranean venues around the city, this single screen theatre was reached through a small entrance that originates on E. 59th Street. The entrance continued past a modest concession area and then ended at a staircase, descending to theatre level.

It went through several name changes and ownerships during it life.

In 2000, the theatre was one of the few theatre’s to show a director’s cut of Luc Besson’s “The Big Blue”.

The theatre closed in late-2003, but reopened in July of 2004 as the 300-seat ImaginAsian Theatre, featuring first-run Asian films, live events, satellite-fed broadcasts (such as sporting events), and exhibitions. The theatre not only offered the traditional popcorn, but had a café serving Asian snacks, beverages, as well as internet access. The theatre’s first offering after reopening was hosting the 27th Asian-American International Film Festival.

By 2010, it had been renamed Big Cinemas Manhattan, and was operated by Phoenix Big Cinemas. It was closed in January 2014.

The old theater is now the Tracy Anderson Group Classes Cafe. A photo taken on August 14, 2017 has been added.

I think it should be titles either 59th Street East when it was Clearview Cinemas and Cineplex Odeon that renamed it (the last name before it went to Big Cinemas) or D.W. Griiffith when it was Cinema 5

Why would you think that if you thought the historic Strand should be renamed for it’s last incarnation?

Al I thought the CT policy was supposed to be last incarnation.

There were some exceptions including the Strand and the Rivoli (United Artists Twin).

This was a great little hole in the wall theater and part of my favorite stretch of movie-ing in the late 80s. It started at the Sutton on 57th and 3rd, then the Gotham, the Manhattan Twin, The DW Griffith, The Baronet/Coronet and ending with Cinema 1,2,3.

The only films I remember seeing here were Lair of the White Worm and The Unbearable Lightness of Being, but I’m sure there were more. To me it felt deceptively large inside (which is always a good thing).

Thanks for the upgrade. I guess they ran out of names for cinemas.