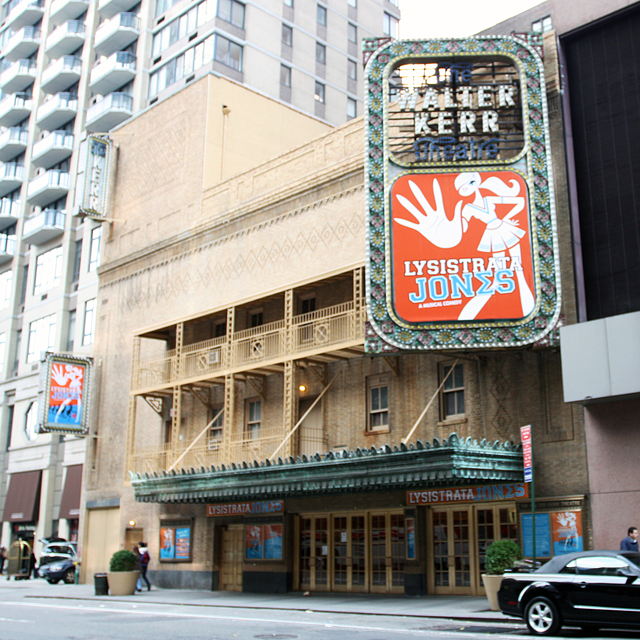 The Ritz Theatre, designed by architect Herbert J. Krapp was opened on March 21, 1921 with “Mary Stuart”, which ran for 40 performances. The theatre was built for the Shubert Theatre Corporation. Closed during the Depression, it was reopened on February 16, 1937 as part of the Federal Theatre Project with “Murder in the Cathedral”, and closing with “Pinocchio” on June 30, 1939. Later in 1939, the theatre was used for radio broadcasts and in the 1950’s as a TV studio. In the 1960’s it became an adult movie theatre.

LostMemory what about the Hilton? and the former Royale?

Lost Memory: If you check the “Gigi” listing in IMDb, under “external reviews” the Variety review lists the opening of the film at the Royale Theatre on a roadshow basis. That may be the only film that ever played there, so in may not qualify the theatre as a “cinema”, but at least one major picture played the house.

“GIGI” indeed played the Royale for most of 1958 before moving to the Sutton. The Royale should qualify as it was not a special event booking, it was a roadshow run.

I had similar misgivings about submitting the Konover in Miami Beach. It was a hotel theatre and lounge that became a Loews theatre in the mid seventies for about a year before going back to live shows.

I am not sure what the policy is but this NYT review shows the “GIGI” premiere at the Royale.

I’d like to know more about the movies shown. Were they just screened for members or at an event or were they regularly scheduled and advertised to the general public. If not the latter I don’t see the Kerr as an appropriate listing for CT.

They were mainstream movies advertised in the New York Times. “Jaws” was one of them.

As far as mainstream films the RFK had special matinee programs of mainstream films but the prime ad found for same listed these as being screened at the Bert Wheeler Theatre (is that on CT) on 43rd Street. Most RFK events were members only, and the small number of
members they had doomed the operation.

Al, since you have located an ad for Jaws at that site would you please direct me to it.

The Ritz screened films for a brief period after 1972. I came to New York in 1974 and at some point probably a few years later, the Ritz once again started screening movies, possibly Kung Fu pictures. I remember going to one just to see the theatre itself. When I went to the balcony I found the projectionist was someone I had worked with in another theatre. He was sitting outside the booth in one of the theatre seats, with the booth door open. It was one of the most sparsely furnished booths I’ve ever seen, without even a chair or stool for the projectionist to sit on. Just two 35mm machines, and perhaps a motorized rewind or just hand rewinds. They may have requested Bill as a projectionist because he was Asian-American, and they might have felt he would be more familar with the material. It was fairly obvious that this wasn’t designed to be a long term operation, and indeed in a few weeks (if that long) the theatre closed as movie venue, which would explain the lack of ads or newspaper mention other than the original story about the theatre’s going back to running movies.

You will find the NY Times ad for “JAWS” on Friday, April 2, 1976, when the Robert F. Kennedy was the only Manhattan run.

It’s funny, that main photo is of the show “Lysistrata Jones” that ran for about a month! That’s the one show I saw there. We were towards the left part of the balcony in the first row. From what I remember, that might have been an interesting angle at which to see a movie, way back when.