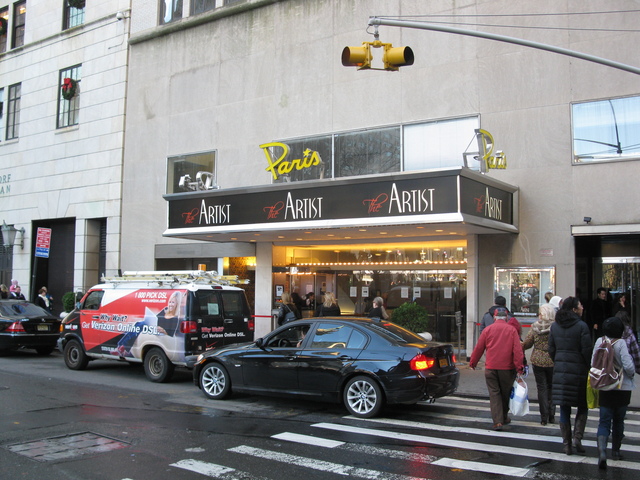 The first of the post-war movie houses constructed in Manhattan, the Paris Theatre is directly across from the Plaza Hotel and not much further from the beginning of Central Park. This luxurious art house in Manhattan’s Midtown has a plain Art Moderne exterior. The auditorium has blue velvet walls and seating for 421 on the main floor and 150 in the balcony. It has excellent projection and sound. The atmosphere is elegant, including with a well attired and helpful staff.

The Paris Theatre opened on September 13, 1948, with Marlene Dietrich cutting the ribbon in the presence of the Ambassador to France. The opening movie was “La Symphonie Pastorale”(Pastoral Symphony) starring Michelle Morgan. The original movie operator, Pathe, ran the theatre until August 31, 1990. The Paris Theatre became one of the very best places to see art house films in New York. As its name implies, the Paris Theatre had an affinity for playing foreign films (especially French films). Many premieres have been held at the theatre, including in spring of 1968 when the Paris Theatre became the first in the U.S. to play “William Shakespeare’s Romeo and Juliet” a United Kingdom/Italy co-production starring Leonard Whiting & Olivia Hussey and directed by Franco Zeffirelli.

Loews took over on September 1, 1990, and the theatre was known for a while as the Loews Fine Arts Theatre. Loews ceased operation of the theatre on April 30, 1997. Reverting back to its original Paris Theatre name, the theatre was operated by the owner of the building until 2009, when City Cinemas became the movie operator. On August 27, 2019, with leases expiring, City Cinemas closed the Paris Theatre with the movie “Pavarotti” and exited the other theatre owned by the owner, the Beekman Theatre.

On November 6, 2019, Netflix reopened the Paris Theatre with their movie “Marriage Story” starring Scarlett Johansson. It was closed on February 27, 2020 for renovations, and remained closed due to the Covid-19 pandemic. It reopened on March 19, 2021 with Eddie Redmayne in “The Trial of the Chicago 7” screened exclusively in 35mm.

The Paris Theater, one of my favorite arthouse theaters, along with the Little Carnegie in midtown Manhattan. HowardBHaas are you currently the Operations Manager? As I see you responding to many of the posts. I do like the fact, that you are very involved with the cinema.

No, I am member of the public who very much enjoys seeing movies here. I do assist as I can with this website.

HowardBHaas, I also enjoyed seeing films there. Thank you.

I think “A MAN AND A WOMAN” holds that record. Page 13 has the 20th Century list.

yes, back in August 2021 when a classics festival was held, including “A Man and a Woman” at the Paris, it was asserted by the theater that it was the longest running Paris movie, and that it had run 65 weeks. Thanks to Al for his list, too.

is there any hope this might be a regular movie theater again? all it shows 99% of the time are Netflix films and for every Roma, The Irishman, Marriage Story and The Two Popes there are 50 Thunderforces.

big joe Netflix seems to only screen their films. Amazon is opening a theater too and I assume they would do the same. Netflix would do better releasing some of their films in a nationwide release. Amazon does a lot of theirs that way. The Gray Man on Netflix is good but it is streaming only and it’s an action film that should have been in theaters

The Gray Man was in theaters, a few hundred sites for a week or two.

Unfortunately for Netflix, this $200 million movie was DOA.

Thanks Mike (saps) it was not here.