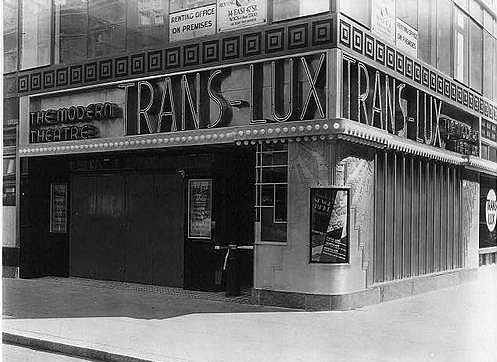 This was the very first Trans-Lux cinema and opened on March 14th, 1931, in space that was originally a corner store on the NE corner of Madison Avenue and W. 58th Street. The theatre had a frontage of 26 feet, a depth of 72 feet, and a ceiling height in the auditorium of 11 feet 3 inches. Interior decor was modern, with no frills. The rear-projection system created a glow bright enough for patrons to read by, and eliminated the need for ushers.

The 45-minute programs of newsreels and short subjects changed twice weekly. Entrance was through a turnstile. If you didn’t have a quarter to insert in the slot, you could get change from the boxoffice attendant. The Trans-Lux proved so popular that it was replaced two years later by a much larger theatre on Madison Avenue between 59th and 60th Streets. This one closed and reverted back to retail use.

I should’ve stated that “The building in which the theatre was located occupied 617-627 Madison…” This is according to the C/O mentioned by lostmemory.
Here’s another photo of the theatre’s exterior:
http://www.ebay.se/viItem?ItemId=7519931641#photo

Was this ever anything other than a newsreel theatre?

Was it ever anythiong but a newsreel theatre?

A view of a Trans-Lux Modern Theatre was featured in an ad for Carrier air conditioners in Boxoffice Magazine, March 7, 1936. I think it’s the same theater seen in the two exterior photos linked in ken mc and Warren’s comments. If this theater closed in 1933, Carrier must have been using an old photo of it. It’s possible that the ad had already been in use for a few years and Carrier was just too cheap to have a new one created.

By the 1970’s the Schraffts gave way to L'Orangerie a belle-epoque style restaurant that tried to capitalize on the tremendous popularity of Warner LeRoy’s Maxwell’s Plum, further east. What was the name of the Trans-Lux house that succeeded the Modern?

This theatre is listed as open in the 1937 Film Daily Year Book.

Linkrot repair: The Trans-Lux Modern Theatre illustrating an ad for Carrier air conditioners in the March 7, 1936, issue of Boxoffice.