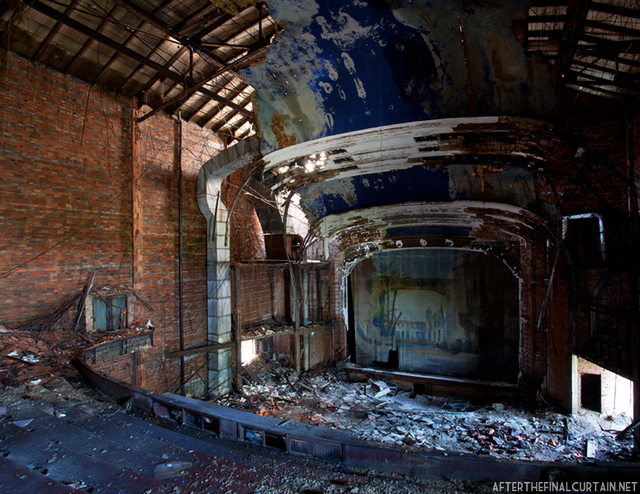 John Eberson designed the Palace Theatre in a Atmospheric style, seating originally nearly 3,000. The theatre opened in November 1925 with live stage shows and vaudeville acts in addition to motion pictures. It was equipped with a Kilgen 3 manual/9 ranks Wonder organ.

Operating for decades as one of Gary’s grandest entertainment venues, the cavernous Palace Theatre slowly slid into decline, closing in 1972.

Since then, several attempts have been made to bring the theatre back to life, but unfortunately, none have been successful. Meanwhile, this sadly forgotten Eberson designed treasure has fallen into major disrepair, with substantial water damage to its auditorium and its Renaissance-style exterior crumbling away. A precarious-looking 1950’s or 1960’s era marquee appears in danger of falling off at any time.

Though in danger of being lost, the Palace Theatre would make an ideal performing arts or classic films venue, for anyone with enough interest, and more importantly, money, to put into restoring it.

OK, I’ll just leave it here. I did remove my duplicate post though.

Question for everyone. I am visiting in the Chicago area, and would like to go and see the Palace Theater. How safe is it to go into the neighborhood during the daytime? Or am I taking my life into my hands?

jalbertsgriffen I’m familiar with Gary. The area where the theatre is is fairly desolate. You can see everything there is on Google Streetview without even venturing there. If you do, stay in your vehicle and be aware of your surroundings. Just like any unfamiliar urban area.

So Trolleyguy, you’re saying there’s no way of going in and going through it?

Went and saw the Palace today. There is absolutely nothing remotely repairable about that building. Multiple trees growing out of the walls and roof. The whole place looks like it is about to collapse into a heap.

I didn’t take any pictures. I intended to, but the neighborhood appeared so threatening that I didn’t feel it was wise to get out of the car, even in broad daylight.

Needs to come down and new housing put there.Is beyond repair total mess.

I stopped there last year, walked the parameter with no problems.