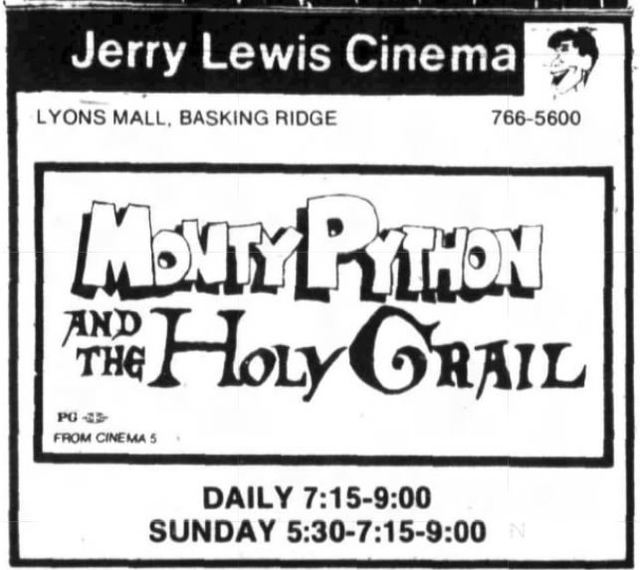 The Ridge Cinema, which we called the Lyons Mall Jerry Lewis Cinema, was located downhill from Ridge High School in Basking Ridge and was adjacent to the train station. It shared a small strip mall with a Grand Union supermarket. Back then this particular Grand Union was also a small department store.

Over the years I went to the Ridge Cinema numerous times, though I cannot recall all movies I saw there. The film I recall most was a late 1960s or early 1970s re-release of LAWRENCE OF ARABIA (many years before the film’s 1989 restoration and re-release). After years of seeing LAWRENCE OF ARABIA on television it was great to finally see the film on the wide screen.

Alas the last film I saw at the Ridge Cinema was Clint Eastwood’s BRONCO BILLY. As I recall the theater still retained its Jerry Lewis caricature logo, though I do not recall if it was still part of the old chain. It was not too long after BRONCO BILLY that the theater closed. A bank replaced the theater. It was about this same time that the nearby theater in Bernardsville was butchered from a grand single-screen movie house into a series of cramped multiplex auditoriums. The days of the single screen cinema began their multi-decade decline.

This opened on January 27th, 1971 in the Lyons Shopping Center on South Finley next to the NJT train station as the Jerry Lewis cinema.

Ad with picture in photo section.

This theatre, as well as the Bernardsville Cinema and the Jerry Lewis Twin Cinema in Carteret NJ were all owned by the same man. When Jerry Lewis Cinemas went bankrupt, the theatres were told to change their front signage. This owner worked on a shoe string budget and never had the money to change them. The one in Carteret kept its signage until it closed in late 1984.

Lyons Mall began construction in 1966 and, when it wasn’t completed, was to be razed in 1968 and started over. The Mini Cinema was announced in September of 1970 by the Ridge Cinema Corporation as a location of the Jerry Lewis Circuit of automated theaters. The Lyons Mall opened a month later with the cinema launching on January 27th, 1971 as the Jerry Lewis Cinema with “I Never Sang for My Father.” The Lewis Circuit’s parent company, Network Cinema Corp. filed for bankruptcy on June 14, 1973 with the circuit imploding a year later. However, the name plate stood here for years to come.

On March 2, 1978, the Lewis name was finally dropped and the theatre operated as the Ridge Cinema. The Ridge closed briefly in 1983 and became the Lyons Cinema until closing on October 13, 1983. It reopened for one final time as the Ridge Lyons Cinema on June 26, 1985 with “St. Elmo’s Fire.” It appears to have closed on September 12, 1985 with John Candy in “Summer Rental”.