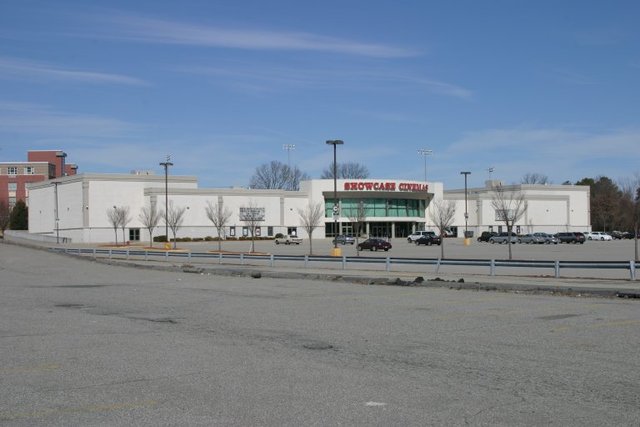 Not long after opening they expanded by adding an additional two screens.
Around 2000 they reconstructed to an 8 screen complex with stadium seating.

They became the only theater in operation in the City of Lawrence, since the original complex across the street closed in 2008. The Showcase Cinemas 7-14 was closed January 18, 2016.

This used to be just a parking lot, additional parking for the original theater across the street. For years the pavement was in horrible shape and the entrance was a little hill on the side of the Stadium Lanes bowling alley that was there before the current strip mall (out of frame to the left of photo). We used to have to push the cars to help them get out in the winter.
The owners of the Bowling alley were always at war with the ownership of the theater, some form of bad blood from the sixties. We used to have to keep attendants in the lot to make sure none of the patrons parked in their lot or else they’d have them towed.
Years later they sold some of the property and built a Denny’s restaurant. Since the foundation was basically wetlands they used a pile driver daily to pound telephone sized stakes into the ground for reinforcement of the foundation. In so doing we’d hear the noise and feel the vibrations all day across the street in the theater (1-4). Not long after we started noticing a lot of mice and rats in the theater that we believe were driven across the street from the construction.
When they opened the new theater across the Street, Bill Hurston, who had been managing 1-4, became the district manager of both. I’m not sure but I believe he was at least with the company until recently.

NOW ALL Digital too!

This theater was used as a set and a scene from Daddy’s Home 2 per http://www.eagletribune.com/news/haverhill/lawrence-movie-theater-becomes-a-major-movie-set/article_7cac0714-6dc2-5fd5-b226-ce47d6c89e4a.html