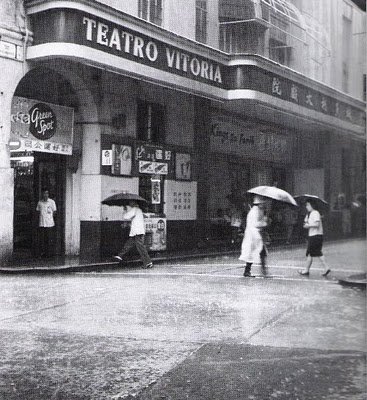 Located in the historic centre of Macau. The Teatro Victoria first opened on 8th January 1910, and screened its first film the following day. The building was made of wood, and was located on the Calcada Oriental. It had an unusual placement of the screen, which was hung in the centre of the auditorium, with seating on both sides, and a narrator describing the film from the side of the screen. The cheaper seats behind the screen saw the image in reverse.

A new Teatro Victoria was built in 1921 on the corner of the main road Avenida Ameida Ribeiro, with an entrance on the narrow Rua dos Mercadores. It became the first cinema in Macau to be equipped for ‘talkies’ from 28th March 1928.

Closed in July 1934, due to out-dated equipment and bad hygienic conditions, it was renovated and re-opened in 1935. The building now boasted a modern cinema, a casino, nightclub and a restaurant. The cinema was again renovated in 1938.

The Teatro Victoria was closed on 25th November 1971, and was later demolished. A Tai Fung Bank building now stands on the site.

:( a Bank instead a theater it’s sad…