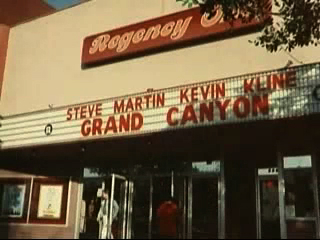 Opened as the Sands Theatre on February 1, 1963 with Elvis Presley in “Girls, Girls, Girls” & Rory Calhoun in “Marco Polo”. From March 1985 it was operated by Pacific Theatres. Since closing it has been converted into the Royal Banquet Hall.

Was this also called Regency 2?

The Regency 2 was a few doors down the block, listed here as the Temple Theatre, its early name. The Sands became the Regency 1 and the neighboring U.S./Temple became Regency 2.

Cinematour has this one tiny photo of the Regency 1 right after it became the banquet hall, before it was completely remodeled.

Here’s its neighbor, the U.S. (formerly Temple), which became the Regency 2

And here’s the Facebook page for the banquet hall that’s in place of the Regency 1/Sands now.

The zoning info claims it was built in 1962, so the current 1920s look would probably be a newly-added retro look, rather than an original faÃ§ade that’s been uncovered. It’s still laid out inside with a “lobby” area with two sets of double doors into the main hall.

my first job at 17 was Assistant Manager at the Sands Theatre, the “last independent in Glendale.” I only remember the owner/operator’s first name now, Bob. A real New Yorker, he had been “in the business for years.” It was the summer of 1978 and he was angry.

His little empire, which included the Sands and a small theatre 10 miles north in the sleepy 50s burb of Montrose, was being denied “major pictures” by the Big Boys: Pacific (Capitol Theatre, across the street), Teddy Mann (Glendale Theatre and Alex down the street) and other chains. So he gambled $25K for exclusive Glendale rights to the last potential blockbuster of Summer 1978. Irwin Allen’s “The Swarm.” Worse, he had promised to keep it in the theatre for 8 weeks. The entire summer. and that’s when Allen earned really earned his title “The Master of Disaster.” It was a long, hot, lonely summer at the end of an era.

Across the street, we watched Capitol open “Grease” to sold out shows and lines around the block. (as part of a reciprocal Glendale theatre workers agreement – by which I clearly benefited more than my colleagues – I took my family to that movie on my one day off per week) “The Swarm” opened to a small audience that dissipated quickly. One by one, we let go each of the other “ushers” until the only people left at the Sands were Bob and myself. Bob stayed in the ticket booth reading Variety as he sold the few tickets requested. I manned the snack booth in the small, hot lobby fronted by end-to-end glass doors. To make ends meet Bob asked me to fill the cups to the brim with ice before putting in the soda with its low syrup mixture. There was a drinking fountain but cups cost full price of the drink (40 cents for a small). There were no exceptions due to the “count” having to be right. When the patrons were inside, I closed the doors and ran up the small wooden stairs and flipped the switch to start the upright projector and set the second reel to rewind. 45 minutes later or so, I ran back up to wait for the double circle flash before I hit the switch to start the other projector and set the first to rewind. If there was a second feature, which beginning on the third week, there always was, I waited for the rewind to finish and then put the next films' reel up on the projector. And so it went, 7 days a week as we tried every second feature we could find to boost the dying headliner – from last winter’s “Saturday Night Fever” to Barbara Eden’s minor comedy “Harper Valley P.T.A.”

As July ground into August, Bob struggled to pay the bills on the meager box office receipts. Finally we were free of the dreaded Fred Mac Murray/Olivia De Havilland insect nightmare but Bob could only afford worn out second runs like the previously mentioned “Grease” which, when combined with another run of “Saturday Night Fever” did a little business. He couldn’t afford to fix the decrepit ice machine and the folks at the Alex Theatre were getting impatient with our constant mid-afternoon requests to raid theirs. And just when it seemed all might be lost, Bob heard about a little midnight phenomenon primarily happening on the East Coast. He had had miserable experiences showing “The Song Remains the Same” and similar concert movies at midnight to stoners. It wasn’t just the fights and spilled beer but it was just a long ordeal that could only happen every so often anyway. This was guaranteed weekly business. So just as I was having to cut back my hours to start my first semester of college, Bob rolled out “The Rocky Horror Picture Show” both Friday and Saturday nights. Not the first theatre in Los Angeles to show it, but the first to show it both weekend nights and the first in Glendale, or even the wider San Fernando Valley. And it was a huge hit. We sold out both days every week until I just couldn’t hold up with the late hours while going to school and I had to leave. But not before I saw my former Burbank High School friends dressed up every week in fishnets and lipstick. Throwing toast and toilet paper and rice (yes, we even allowed that and had to sweep it up before going home. How I loved the 70s and my first job in the “theatre.” And Bob? For a few years he did great. He bought another theatre on Brand and changed their names to Regency I and II. And then he sold the whole package to his former nemesis Pacific Theatres. But not before he made a buttload of money for his retirement from Dr. Frank N. Furter … and his loyal apprentice.

Tony – As a movie fanatic kid who grew up in Glendale in the late ‘70s and 80s, I love your stories! I feel like, after this theater stopped function as the Regency 1 (which was in 1991 or '92 probably? The last first-run film I remember seeing there was Boyz In The Hood in July of '91.), I recall it having a short-lived rebirth under a different name, showing only movies out of Hong Kong and China. I recall seeing a double-bill of two films – one being Jackie Chan’s City Hunter – sometime in 1993 or 1994. But I think this experiment lasted a couple of months at most. Shortly thereafter, I believe it became the banquet hall. Does anyone else remember this?