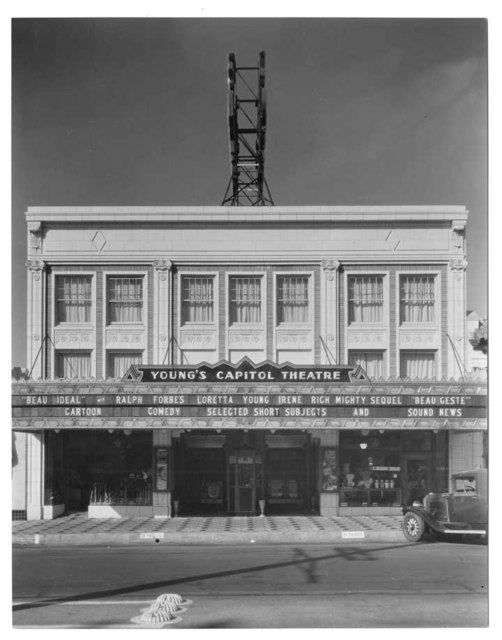 Young’s Capitol Theatre was opened around 1930. It later became a district 2 Fox house. Last operated by United Artists into the 1980’s.

What Glendale had was The Roxy, The Alex, The Sands, The UA, The Glendale, and The Capitol all within about two blocks! You could also park there (unlike Burbank and Pasadena). Plus, in the eighties, a few of them had “one dollar Tuesday night”! I lived two blocks away and this was a great time!
BATMAN was a memorable first run at the Capitol…a rare time I had to wait in a line.

Jack Hicko mentions the UA Theater in Glendale. Where was it located? I spent many happy Saturday afternoons at the Alex, Capitol and the Glen, but I can’t remember where either the Glendale or the UA were? Talking about late 40’s. Diana Ellis

My life there was in the 80s. Start at The Alex and walk south. Cross Broadway, soon on your left at 122 South was The Glendale (a “twin” when I was there). Proceed south. The UA and The Sands were little theaters in the same block…still north of the tall building (which I think may also have been a theater). They felt like they had seen much better days. At Colorado, cross Brand and turn back north. You would then pass the site of the Capitol. Continue north past BofA and The Roxy would then be on your left.

Thanks, Jack. The tall building you mention was the Temple Theater, a place where decent girls NEVER WENT in the 50’s. It was part of the Masonic Temple. Diana Ellis

If they went to the effort to change the marquee to Young’s Capitol Theater, as shown by the photos above, that should probably be an AKA.

While I never went to the Capitol myself, only having just move to Glendale at the time, I remember it was sitting vacant before the Northridge quake. After the quake, there was extensive damage to the theater’s south wall, and it was demolished shortly afterwards. You could see that the old brick walls had never been retrofitted, which was the probable reason for the partial collapse. That was also probably why it was closed, as by that time retrofitting was mandatory, but I guess they didn’t want to put in any money to keep it open and standing.

Can’t remember if this was already posted, but here’s a Glendale Public Library photo:

In drb’s shot, you can see the Glendale Theatre’s marquee and vertical sign just down the street on the right side of the frame.