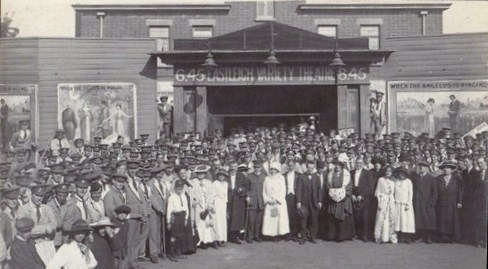 The Variety Theatre was completed in 1911, with a stage, flies, dressing rooms and an orchestra pit. Its capacity was about 700 in the stalls and balcony. It opened on Whit Monday 5th June 1911 under the direction of R. J. Pollock. From 1914 films were shown on Sunday evenings whilst during the week a play or a variety show would take to the stage.
1911 was becoming a very interesting year for the 4,000 inhabitants of Eastleigh. A mixture of variety, straight drama and comedies was the mainstay of the Variety Theatre. From 1914 films were shown on Sunday evenings at the Variety Theatre, as live performances were prohibited on that day.

In 1916 a 21 year old, George Wright, became manager of the Variety Theatre and it was George that started the occasional film programmes. This was mainly due to the effects of the war reducing the numbers of people available to entertain and thereby limiting the availability of appropriate shows.

In 1920 the Variety Theatre went over primarily to film use. The programmes changed twice a week and the music was provided by the theatre quartet. When a film required a wider range of music, a full orchestra would be provided and so it continued until Christmas Day 1925 when George Wright, proprietor of the Picture House purchased the Variety Theatre.

Being a musician himself he was keen to put on musical entertainment in addition to the film programme and so music became an important part of each programme. The entrance to the Variety Theatre fronted Market Street with a passageway containing the ticket office leading to the auditorium some twenty yards from the foyer, much the same layout as the rebuilt Regal Theatre. The 1925 movie “Sally of the Sawdust” played the Variety Theatre not long after its premier run at the Empire Leicester Square in London.

During the early months of 1928 a ‘junior’ Christie Unit Organ was installed in the Variety Theatre, the organ loft being accommodated in one of the dressing rooms above the stage. This was the first installation of its kind in the UK. It was a 2 manual organ with 63 stop keys and 500 pipes ranging from 3 inches to 10 feet in length. For the inaugural week renowned C. Tootell was at the keyboard but the residency was taken up by F. Boyd Oxford.

On December 16th 1929 the Variety Theatre was renamed Regal Theatre. The last film under the banner Variety Theatre was “Shiraz”, and “High Society” launched the Regal Theatre. Talkies came to Eastleigh and the Regal Theatre on 28th April 1930 with “Sunny Side Up”. Unlike other cinemas in the area George Wright opted for the RCA Photophone system with new Simplex projectors (whereas the others had gone with Western Electric).
On July 1st 1933 the Regal Theatre closed for redecoration, new seating, and technical improvements to bring it up to the standard of a new cinema recently opened opposite. The street frontage was updated and the long planned units each side of the entrance were finally built, as can be seen from the new banner introduced in local advertising.

The refurbished Regal Cinema reopened on 7th August 1933 with Boris Karloff in “The Mask of Fu Manchu”. At this time films were not shown at the Regal Cinema on a Sunday, however they were across the road in the Picture House.

This was a first step towards a major transformation project for the Regal Cinema, demand was such that capacity had to be increased and the Regal Cinema brought up to the highest standards being set by the new cinemas being opened by the major chains in nearby towns. In Southampton luxury venues such as the Regal (Odeon), Forum, Plaza and Broadway had been opened whilst in Winchester a new Regal (Odeon) had been built to replace the old Picture House (now Superdrug) in the High Street.

In 1936 Eastleigh gained Borough status and as if on cue on 8th August 1936 the Regal Cinema closed, this time for major internal reconstruction during which the balcony, bar and stage were removed. Plans were by architect Robin A. Thomas. The result was a much larger cinema but no longer able to host theatrical performances. The interior with a new balcony and splendidly ornate plasterwork was enhanced by concealed colour lighting. A new 3 manual Christie organ was installed and the organ loft was placed in the roof over the organ console. The Regal Cinema reopened on 14th December 1936 with Fred Astaire in “Follow The Fleet”.

One’s first impressions on entering the new theatre is of soft, rich colourings, creating an atmosphere of quiet luxury ‘an atmosphere that is at once striking, but at the same time dignified and never obtrusive. The architectural ingenuity displayed in the combination of ceiling and proscenium treatment succeeds so well that one is struck by the remarkable and incidental effect, so difficult to adequately describe. The reconstructed Regal Cinema accommodates 1,000 patrons. The main entrance has been retained, but on entering the original vestibule immediately facing, is a new staircase leading directly to a small foyer and thence into the reconstructed balcony. The entrance to the stalls is made by passing either side of the stairs into a foyer and then into the new auditorium. To obtain increased accommodation the stage has been almost entirely removed and only sufficient retained for small vocal or instrumental items, whilst the old three gangway style has been changed to the more convenient and comfortable two gangway idea. In accordance with the licensing authorities new exits have been provided from the balcony and from the stalls leading to passageways on either side of the building.

The decoration of the whole building has been designed in unique fashion, the main feature of which is a combination of concealed three colour lighting and decorative plaster effects. Two series of ten illuminated arches step down from the back to the main ceiling and give a bold and rich effect to the whole scheme. A unique feature in the auditorium is the treatment of the proscenium. This feature occupies the whole of the stage end of the cinema and extends some 20 feet into the auditorium itself. On the side walls of this treatment there are alcoves on either side containing large decorative light fittings. It is without doubt that the proscenium is the finest for many miles. Over the proscenium is a large decorative plaster grille serving the organ loft.

A new 3manual Christie organ has been installed by William Hill & Son and Beard Ltd. of York Road, London N7. The organ has been built in special chambers above the proscenium and some idea of the size of this feature is obtained when it is considered that certain pipes of this organ occupies the whole width of the cinema (60 feet) and in total they weigh 7 tons. The brilliantly illuminated console is situated in the centre of the auditorium against the stage. The console has been designed to rise above the stage and disappear out of sight when not in use. The latest type of RCA sound equipment has been installed. The system gives much greater range of high and low sound than was previously installed in the cinema.

The whole of the projection rooms have been redesigned and reconstructed giving the most up to date accommodation required in a modern cinema. The dimmer bank which operates the colour lighting looks by its array of switch levers would look at home in a signal box. Robert Williams, Chief Electrician to the Eastleigh cinemas for 18 years has been the electrical engineer for the whole scheme. Apart from the main features there has been given considerable thought to the smaller details ‘all for the real comfort of the patrons. For instance up to date Uni-Hygea toilet systems have been installed, electric spotlights appear over the mirrors in the ladies cloakrooms and in the vestibules illuminated receptacles flush with the wall invite your cigarette ash’.

The famous BBC broadcasting organist Reginald New was booked to appear at the console of the new organ during the first week. After the opening speeches and presentations the programme commenced with “Universal Talking News” followed by the strains of organist Reginald New’s signature tune “Here We Are Again”. Spotlights then played on the illuminated organ, which rose from its position in the pit to the level of the stage. In the hands of this remarkable player, it was evident that the Regal Cinema possesses a very fine organ indeed. During the organ interlude the audience were struck by the display of colours throughout the auditorium. Particularly impressive was the magnificent silver festooned curtain with its ever changing colours. Appreciation was shown too of the theatres luxurious upholstery, the thick pile carpets and the comfortable seats, which are similar in all parts of the theatre. The main film “Follow The Fleet” followed and remained for the entire week.

The Eastleigh cinemas of George Wright were said to have a personality that rarely exists in the typical super cinema of the day, their slogan ‘Come to the cinemas where you feel at home’ implies the warm intimacy of both venues.
Later CinemaScope arrived at the Regal Cinema with Alan Ladd in “Drumbeat” on 26th May 1955.

A refurbishment which took place in 1967 included the placement of a new wide screen in front of the existing proscenium, a new magnetic sound system and gold drapes which extended along the walls each side of the screen; gone were the 1930’s silver festoons. The work was completed in time for a rerun of John Wayne’s film “The Alamo”. Through the 1970’s the Regal Cinema often hosted first runs for the Southampton area when the Christie organ once again became a feature of the programme. The Regal Cinema closed with “Star Trek” on 12th April 1980 but it was reported that the town would not be losing its cinema altogether.

Extensive rebuilding work, designed to transform the Regal Cinema into a modern entertainment complex was being planned for the summer. Inside the new building will be a 350 seat studio style cinema and a 500 seat bingo hall. A restaurant and bar has also been given planning consent. Malcolm Wright, whose family has run cinemas in and around Eastleigh for 60 years, had sold off all of his father’s other cinema assets, said that building work would start in the next month and he was looking for an opening in the autumn. But that would not be, what happened is enough for a book in its own right. But in a nutshell Malcolm Wright and a group of other local business luminaries pooled their assets into a venture called Leading Leisure, focussed on bars, restaurants, clubs and hotels rapidly overstretched themselves and lost everything. The Regal Cinema, having obtained a bar and restaurant license became a Bar/steak house called Hancocks over what was the foyer and in an extended balcony a nightclub Martines was opened. The larger part of the stalls became a retail unit. A sad outcome which probably had George Wright turning in his grave. In 2010 the night club has recently reopened having been closed for many years.

Great shot of Malcom Wright in front of the theatre he inherted,great look on his face ,like man this is mine!!!!