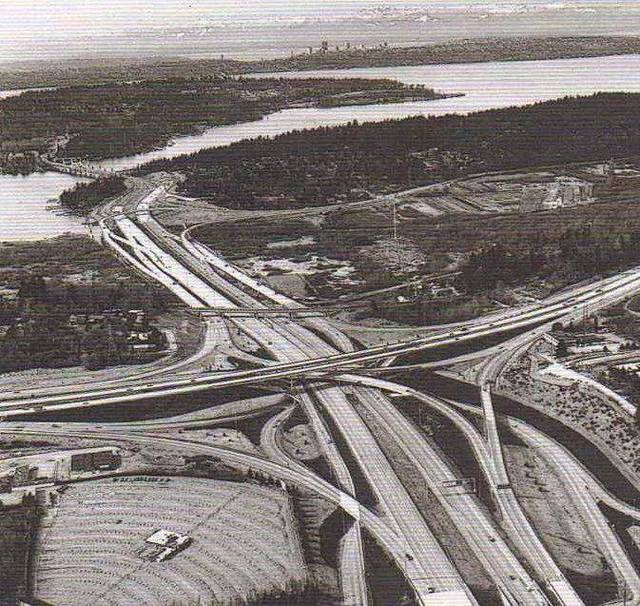 The Sunset Drive-In, south of Bellevue off Factoria Boulevard, was opened on September 1, 1950 with George Montgomery in “The Iroquois Trail” & Kent Smith in “This Side of the Law”. It was torn down and replaced with Factoria Cinemas.

We used to watch movies across the I-90 on the hill next to our church back in the early-1970’s.

1964-1980 operated by Sterling Theaters Co. of Seattle? In 1967 Sterling had 39 theaters in Washington, Oregon and Califorinia. Under Sterling the drive-in is listed as being in Bellevue!

Remember going to the Sunset Drive In as a kid in our parents station wagon. Was only $4 per carload back in the 70’s. Also Really miss the other drive ins that closed down, like the Aurora (now Sam’s Club), Bel-Kirk, Sunset (now Factoria Cinemas), Duwamish (now Boeing Office), Midway (was Swap Meet), & Sno-King (was Swap Meet).

Their beloved place with all those memories of summer nights snuggled up, and sometimes even watching movies through windshield wipers in pouring rain, has to adapt or die. And adapting is going to cost something like $80,000, not money that mom-and-pop operations on a shoestring have handy. That’s how much a digital projector costs, and drive-ins like the Blue Fox, and their cousins — the theaters in small towns — have no choice. The days of 35-millimeter film are nearly over. The reels have been replaced by a computer hard drive, and going digital costs plenty. A woman writes, “I love the drive in theater … Places in times like these should never wither away, we need our roots, our memories, our simpler times to keep us grounded and focused.” Darrell Bratt, who, with his wife, Lori, bought the Blue Fox in 1988, jokes that if just one fan of the drive-in bought a T-shirt for $80,000, everything would be fine. So far, he’s sold about $16,000 worth of them. The theater is still using the same projector as when the drive-in opened — the Century Model SA, Serial No. 6019. It is a workhorse in the industry and has been working just fine through all the decades, just some minor tuneups. The old-fashioned machines that seemed so romantic as the film wound through have been replaced by a 2 ½-by-3 ½-foot black box that is the digital projector, plus a computer server and a laptop. The movie itself? It is shipped to the theater in a metal hard drive like you’d see in a home computer, except it has a monster memory that can hold six full-length movies. The hard drive is “ingested” into the server and won’t play unless digitally unlocked with an emailed password, and it’ll only stay unlocked for a certain period of time.

For the studios, the math is simple. A typical two-hour movie takes up a little over two miles of film. It costs $1,200 to $1,500 for each print. A widely released film like “Prometheus” opened in some 3,400 theaters, says Patrick Corcoran, director of media and research for the National Association of Theatre Owners. You go digital, “and you save a billion in striking prints and shipping costs,” says Corcoran. He says three-quarters of movie screens already have switched to the new format. “Sometime in 2013, the major studios will basically stop distributing movies on film,” says Corcoran.

Above address is incorrect. That is the address for the theatre that partially replaced this drive-in. There was NOT an entrance on Factoria.

Approx. address for this drive-in was 12500 SE 38th St. This driveway was the entrance.

The movies I saw at this theater include West Side Story, Hell in the Pacific and Goldfinger among others, not to mention the R rates showings such as I Am Curious Yellow which I saw from the same Woodridge church parking lot as Eric I think. When I was really young we would make a ton of popcorn and go down to the drive in with pajamas on, play on the swings before the show and sleep in the back seat thru most of the feature.

Mostly in answer to Bob Jenson, Factoria was an unincorporated area just to the South of the City of Bellevue, WA. Mailing address for the drive in would have been Bellevue. It was owned and operated by SRO (Sterling Recreation Organization) until it was demolished and replaced by Factoria Cinemas. Locally owned SRO Theaters was sold to Cineplex/Odeon in December of 1986. SRO owned and operated theaters, bowling alleys, and radio stations throughout the Northwest. The company remains in business today as the “Sterling REALTY Organization” as a commercial property firm. Strip malls and business parks sit on the sites of some of the former theaters. Some sites were sold, SRO remains as the landlord of the others.

I will also add the comment that SRO was a class act. I worked as a projectionist for them and for their competition as well. SRO ran the cleanest, nicest and best equipped theaters in the Seattle area in the 1970’s and into the 80’s. Things changed not too long after the sale to Cineplex.