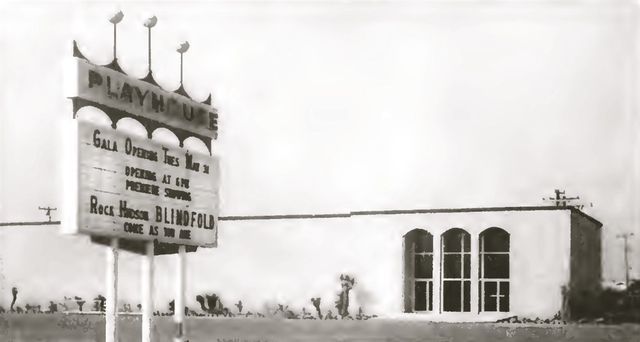 The Playhouse Cinema opened on May 31, 1966 at 6:00 p.m. Advertisements for the theater boasted "authentic Spanish decor." The premier feature was "Blindfold" with Rock Hudson and Claudia Cardinale. On November 9, 1971 it was expanded to 3-screens. From 1979 it had 4-screens.

Operated by Frels Theatres, then Cinemark, it was closed on May 10, 2001. In 2016 it was converted into a children’s museum.

From the Victoria Advocate, February 16, 1972 – Several changes in management were announced Tuesday by Rubin S. Frels, president and general manager of Frels Theatres, Inc. Irving Cohn, who has been manager of the Playhouse since it opened in 1966, was named circuit supervisor of concessions for the 12 South Texas theaters in the Frels group. Cohn will work out of the general offices at 210 E. Constitution. He has 20 years experience in theater work. Mac Range, assistant manager at the Playhouse the past year, has been promoted to manager. He joined Frels three years ago, coming to Victoria from Gloucester, Mass., where he was employed by the C.B. Fisk Co. He is a native of Dallas.

Interesting time for this old playhouse Tuesday will be the 50th anniversary of it’s opening, and the building is being brought back to life. The building is being remodeled by the Children’s Discovery Museum of the Golden Crescent and will be reopening ‘soon’.

Closed by Cinemark on May 10, 2001 when Cinemark launched its 12-screener. It closed as a discount house with What Men Want, The Mexican, Snatch, See Spot Run and Down to Earth