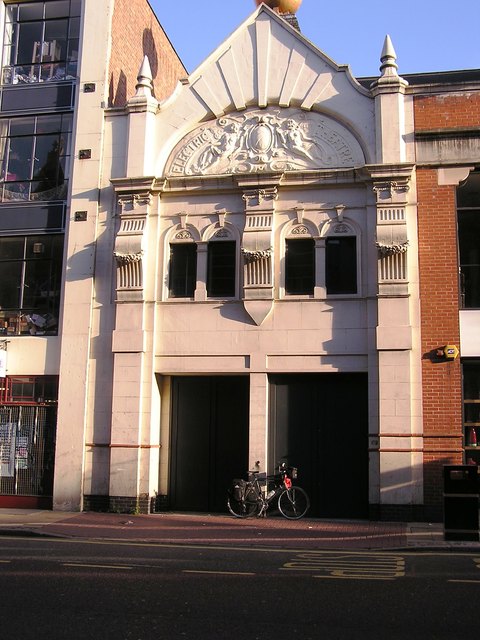 Located in the city centre. The Electric Theatre was opened in August 1910. Designed by the Birmingham based architectural firm Ward & Ball for the London and Provincial Theatres Ltd. chain.

It had an elaborately decorated façade, which had the name ‘Electric Theatre’ in the stonework above the entrance, and above that was a tiled mansard roofed dome surmounted by a large ball. The auditorium ran to the right of the entrance and parallel to the High Street, and had a series of decorative swags along it side wall. Inside the auditorium, all seating was on a single level. The barrel ceiling had a series of beams across which were richly decorated with plaster fruits.

In 1915, it was re-named Imperial Playhouse, then by 1922, it had been re-named Arcadia Cinema. In the early-1940’s, all seating was removed and it became a roller-skating rink and amusement arcade. This use lasted until 1949, when it was re-seated and re-opened as the Cameo News Theatre.

From 1957, it was known as the Cameo Theatre and specialised in screening ‘B’ films in double bills, as well as European dubbed films. It was part of the Clavering & Rose chain of Cameo Theatres and in the mid-1960’s they were taken over by the Classic Cinemas chain, and the Cameo Theatre was re-named Classic Cameo Cinema. It was closed in 1976.

By October 1978 it was operating as a Cascade Bingo Club. It became the Classic Amusement Arcade until 1988, when it closed and was leased out as a computer store until 1991. The building stood empty until 1994, when the auditorium was demolished, but the original ornate entrance was retained. A Habitat furnishing store was built on the site in 1995, and this was closed in May 2010. Since February 2016 it has been an Amplifon hearing centre.

I visited here on one early occasion to see a comedy double bill of a famous cloth capped comedian in around 1966 or 7. It was so funny, and it warmed my heart. It had a yellow neon sign I remember. I would go when it was still called the continental. I remember it well.

This was an early occasion when my dad took me for a treat to see him.

Operated as a bingo hall by Cascade Bingo, as shown in the gallery.