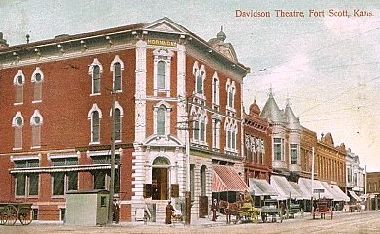 From the early 1900s a postcard view of the DavidsonTheatre in Fort Scott.

I don’t know the exact address of the opera house itself, but the building it is in is at 2 N.Main Street. The First National Bank-Davidson Opera House building is a contributing structure in the Fort Scott Downtown Historic District. The Davidson Opera House was an upstairs theater with 800 seats, opened on January 1, 1875.

An article in the January 2, 1915, issue of The Fort Scott Tribune said that the previous night’s concert by the Washington University Glee and Mandolin Club was probably the last event the theater would ever host. It took place on the 40th anniversary of the opening. The space the theater had occupied was filled in with offices that year. Fort Scott then had no theater suitable for road attractions until the Liberty opened in 1919, though there were four moving picture theaters in operation during that time.