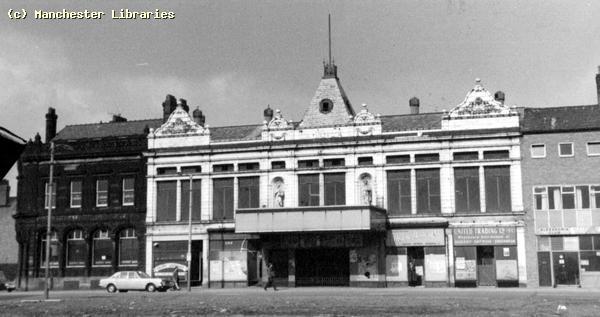 Located on the corner of Oxford Road and Booth Street East, in the All Saints area, close to Manchester city centre. The La Scala Cinema was opened at Whitsun in 1914 (31st May 1914) with a seating capacity of 2,300. It was built for Bernard Rhodes and initially the entrance was on Booth Street East, but it was soon moved around the corner to the main Oxford Road. The La Scala Cinema also had a ballroom and a café.

On 22nd August 1928, it was taken over by the Associated British Cinemas(ABC) chain. Taken over by an independent operator in October 1945, it was re-named Roxy Cinema. It was closed in January 1958, for a total modernisation.

Taken over by the Star Cinemas chain in April 1962, bingo was tried, but films also continued. In July 1965, the final programme was Dean Martin in "38-24-36"(Canzoni Nel Mondo) and Flora Romeiro in "How I Lived As Eve". It was demolished in 1970, and the Manchester Aquatics Centre was built on the site.