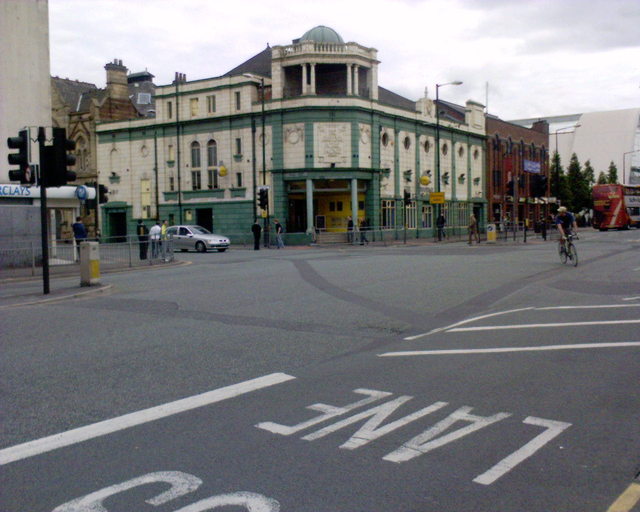 The Grosvenor Picture Palace lies just outside Manchester city center in the All Saints/University area of the city, and has dominated the corner of Oxford Road and Grosvenor Street since opening on 19th May 1915 with Blanche Forsythe in “Jane Shore”(The Eternal Strife).

Operated for many years by the H.D. Moorehouse chain, it survived unaltered and without major incident until it was acquired by Star Cinemas Group in the early-1960’s joining the nearby Regal Twins (now Dancehouse Theatre).

Star introduced Bingo and, for a time, the building operated as a dual cine-bingo operation until the last film show came on May 18th, 1968 with “Passionate Demons” & “Attack of the Crab Monsters”. Bingo took over completely, the Grosvenor Cinema had still not been altered from opening.

Bingo, too, failed and it became a Riley’s Snooker Club for several years. After a few years of being boarded up the first major changes were made to the building when it was converted to the Footage and Firkin public house (Bar). However much of the interior, including the balcony, vaulted ceiling and much plasterwork survives today.

Since the 1990’s, the Grosvenor Cinema has been designated by English Heritage a Grade II Listed building.