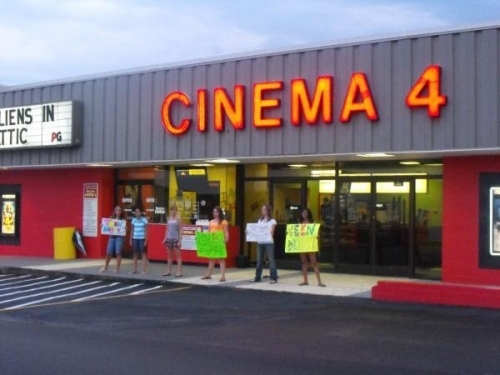 Located near a less-than-economically-robust mall, this theater opened in the early-1970’s as either a single or twin screen theater; it later was expanded to four screens. It was formerly operated by Carmike, and is now an independent cinema.

There are some pictures of this theater near the bottom of this page (scroll down): View link

This is one of the theatres I assisted as an apprentice technician installing the projection & sound equipment. I had just returned from my short Navy carrer. The theatre was a single screen when built and operated by Stewart&Everett.

While installing the equipment here I met a gentleman who owned a local Drive-In in the Forrest City area. Later on while living in Greenville, N.C. he was contracted to pick me up in his “Beechcraft” Bonanza and transport me to do an emergency sound repair in Morehead City, N.C. We became friends and he let me co-pilot his plane. Later he went on to tell me that he had at one time modified his plane to accommodate a loudspeker that had formerly been used on military tanks. To promote his drive-in, he would fly over the city and advertise the upcoming films for the week.