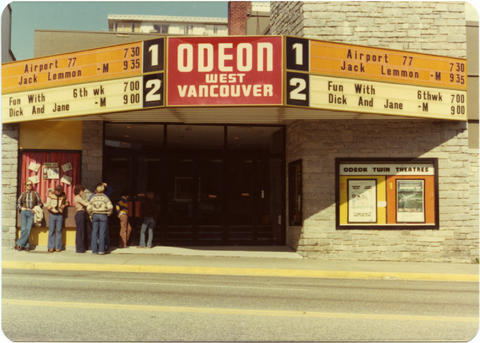 sorry. it was intended for the Strand theater entry. I write my text first in Microsoft Word then copy and paste.

In any case, West Vancouver Odeon actually opened in 1947 known simply as the Odeon. It was renamed West Van in 1957. Twinned in 1974 and converted to Triplex in 1980. It was designed by Jay English. When it first opened, the exterior and interior walls, ticket and concession counters were clad with stone work. In fact, the design was very monotone and modern, devoid of any ornamentation. However, English did incorporate an flaired front wall which is typical in many of his designs. I would hardly characterized the original design as being Art Deco. Seating capacity for the theater was 768.

ScreenClassic is right; the official name for this theater in papers was ‘West Van Odeon’. I saw many movies here as it was 1 of only 2 theaters on the North Shore (the other being Park Royal, also long since closed). I remember seeing ‘Return of the Jedi’ more than once at this theater.