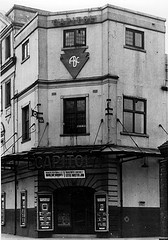 Located in the potteries town of Hanley, Staffordshire. Originally opened in 1880 as the Royal Alexandra Music Hall, by 1892, it had been re-named Gaiety Theatre. In 1890 it was known as the Empire Theatre and was re-built to the plans of noted theatre architect Frank Matcham in 1898 when it was known as the King’s Palace Theatre. Extended in 1901, to the plans of a Mr Brearley it became the Kings Theatre.

Films were screened as part of the programme in the early days, and for a while it was known as Moore & Kennedy’s Picture Hall and was closed in 1921.

Alterations were carried out by a Mr Grant, and it became the Capitol Cinema from August 1925 with the film "Kalora-the Belle of the Orient". It had rear projection from a projection box located on the 18 feet deep stage.

Associated British Cinemas(ABC) chain took over on 9th December 1929. A new projection box was built at the rear of the auditorium. Now with a seating capacity of 1,238, it boasted a cafe for the convenience of its patrons.

It was demolished in 1965 and a branch of Marks & Spencer’s was built on the site.

A vintage photograph of the Capitol Cinema in 1946:
View link

After closure as a cinema, the Capitol became a Bingo hall for a while, but was finally closed and demolished in November, 1965.

CinemaScope was installed at the ABC Capitol in January, 1955 and their first presentation in the revolutionary new system was KING RICHARD AND THE CRUSADERS, which began a six day run there on Monday, January 17th. At the same time, the other ABC cinemas in the area, the Empire, Longton; the Majestic, Stoke and the Savoy, Newcastle under Lyme, ran a ‘flat’ non anamorphic Academy Ratio version of the film, which had been filmed separately for showing in cinemas that had not yet been equipped for CinemaScope presentations. Filming of these separate non anamorphic versions of CinemaScope films continued until late 1956, by which time it was found that almost all cinemas had been equipped to screen films in CinemaScope and the filming of secondary versions was deemed no longer necessary.

Hmm. Yes ABC and other companies started closing their 3rd cinemas in towns.. to avoid the cost of conversion.. The sale of these theatres defrayed the expense of conversion to Cinemascope type formats. ABC did not have many true Fox Cinemascope sites.. Cinemascope was patented in 1917 by Bausch & Lomb.. Although this had run out by the time Fox decided to try the format, they used their lenses.. Cinemas that shown Cinemascope in the first period used Bausch and Lomb.. ABC and Rank where cheapskates and used Delrama and Ranks own make.. I may add that I am Ex real ABC and Independent… I had put a picture of the Capitol Interior as a Bingo operation on and it has disappeared of the site. ?

I heard a completely different story of the origins of CinemaScope, Mike. It began in the First World War when a French inventor, Professor Henri Chretien, developed a special anamorphic lens that optically squeezed a wide angle view of the outside terrain when viewed through the narrow periscope of a tank. Later on, in 1930, Chretien developed his Hypergonar lens, as he called it, for use on movie cameras and made a demonstration film with it. But the film industry, having just spent a fortune on installing talking pictures, were not interested in spending even more money on Chretien’s wide screen system during the Depression. So Anamorphoscope, as Chretien dubbed it, was put on the shelf until the 1940s when J. Arthur Rank took up an option on it but never used it.

In 1952, Rank’s option on it lapsed and Spyros P. Skouras, president of 20th Century-Fox, went over to Paris with his technical development man, Earl Sponable, to see Chretien and be given a demonstration of Anamorphoscope. They were impressed enough to buy the rights to the system off him and returned to Hollywood with the only three anamorphic lenses that Chretien had, and made a demonstration film for Darryl F. Zanuck, vice president at Fox. Years later, he recalled: “I went for it! It was the God-damnist thing! Today, it would look like nothing!” Gradually, the technical department at Fox developed Chretien’s system into CinemaScope and, with only three lenses, they engaged the Bausch and Lomb company to make more lenses based on Chretien’s design.

At that time, early 1953, THE ROBE had been shooting in the standard 4 x 3 format for a number of weeks and Zanuck took the biggest gamble of his career. He stopped production on THE ROBE and restarted it all over again in CinemaScope, although hedging his bets by making a separate 4 x 3 version in case CinemaScope didn’t take off. But it took off like a bird. It was a Fox employee that thought of calling the new system CinemaScope and the name was taken up by Skouras and Zanuck, until someone informed them that name was already copyrighted by a film store in Los Angeles. So Fox offered the owner $50,000 for the name. All the store owner had to do was to sell them the store’s name and rename his store. The store owner sold them the rights to to the name CinemaScope and the rest, as they say, is history. For creating the process, Chretien received a 1953 Academy Award at the 1954 Oscars ceremony.