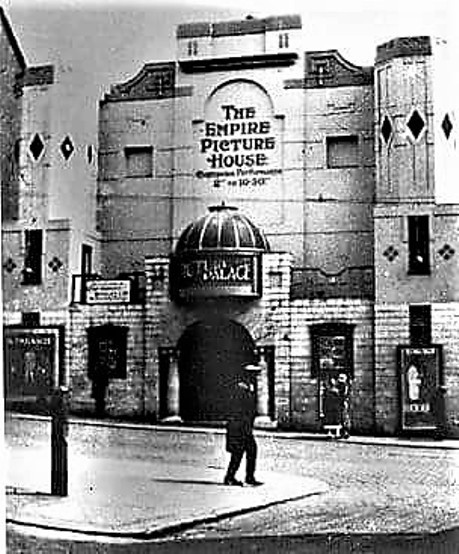 Located in the Staffordshire Potteries town of Hanley. The Empire Picture House was the first purpose-built cinema to open in the town. It had an entrance on Piccadilly at the corner of Brunswick Street and another on Trinity Street opposite the Grand Theatre of Varieties (later Odeon). The Empire Picture House was opened on 26th December 1910. In 1920 it was taken over by the Bioscope Picture Theatres circuit, and in November 1926 they were taken over by the Gaumont British Theatres chain. In January 1930 it was equipped with a British Acoustic(BA) sound system.

I was equipped with CinemaScope and the first film I to play in that process was Judy Garland in “A Star is Born” on 1st August 1955. This was near the end of the Empire Cinema’s life, as it was closed by the Rank Organisation on 29th September 1956 with Kenneth Moore in “Reach For the Sky”. The Rank Organisation toyed with the idea of converting it into a ballroom, but that never happened and the building was sold to be demolished and the Piccadilly Arcade Shopping Centre was built on an enlarged site.