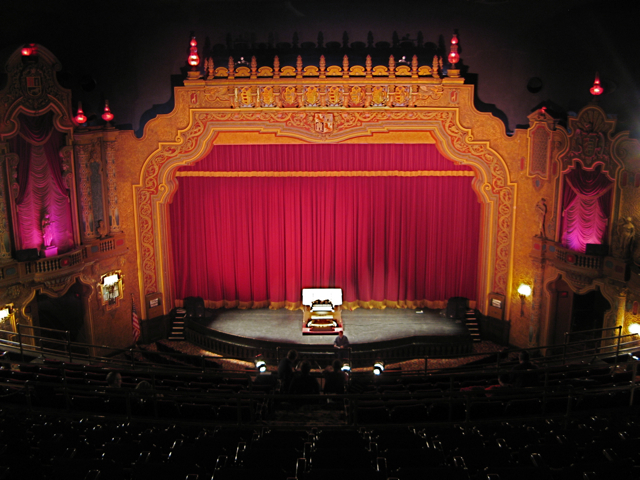 In downtown Canton, Ohio, a standing room only crowd welcomed the opening of Harry Harper Ink’s million dollar, 2,000-seat vaudeville and movie palace on Monday, November 22, 1926. It was equipped with a Kilgen 3 manual 9 ranks organ which was opened by organist Banks Kennedy, and the first piece of music to he heard was “Valencia”

Designed by the famed Atmospheric style theatre architect John Eberson, the Canton Palace Theatre duplicates a Spanish courtyard on a midsummer night. The ceiling, a starry sky with wisps of clouds, creates a dream effect for the audience to enjoy.

Doomed by the advent of television and a period of neglect and decay to Canton’s downtown area, the Palace Theatre’s doors were locked to the public and the marquee darkened on its 50th anniversary in 1976.

Rescued from the wrecking ball by a group of concerned citizens and the City of Canton, the Palace Theatre was held in trust until The Canton Palace Theatre Association could be formed. The building reopened in 1980 and the restoration of the theatre has been ongoing since. To date, approximately $4.0 million has been spent to restore the building.

The majestic Palace Theatre is once again the heartbeat of the Canton community and plays host to over 300 events per year that has an attendance of over 100,000 per year.

The theatre shows movies, art films, and many types of live talent events. The Kilgen organ is still in situ in the building today and following its restoration in 1993 it now has 11 ranks. it is the only Kilgen organ which is still in its original home.

The theatre is now listed on the National Register for Historic Places.

Lost: As you may recall, I have toured this beautiful theatre and met the manager, Rob who is “CantonPalaceTech”.

Lost: No, unfortunately not. There was a reason, but I don’t recall at the moment why. I do recall seeing this theatre from top to bottom though.

Lost: I must have seen this organ on the stage in front of a red curtain so this must be the mysterious white organ that I remember seeing in a theatre somewhere and that somewhere was the Palace in Canton Ohio!

ken mc: Thank you for posting the above information about this theatre and its needs in the 21st century. I hope and urge anyone in or near the Canton OH area to consider attending their fundraiser event, “An Affair to Remember” fundraiser which will help support the Palace. As I’ve mentioned before…I’ve seen this theatre from top to bottom and it is an Eberson beauty still standing proud on Market Street in downtown Canton.

What a wonderful-looking theatre! Glad to hear/read about this theatre’s fund-raising/restoration opening, and that it wqs saved from the wrecking ball. All the best of luck to the theatre staff, and the City of Canton, Ohio.

I had forgotten that the infamous wrecking ball was close to being in this theatre’s past. Thank goodness it is still with us though amazed at the cost to heat such a building in today’s economy. That is why it is so important to have theatre fundraisers, etc.

The Canton Palace is one of the finest theatres in both Ohio and the United States. The city of Canton and Stark County is very proud. Was personally involved in restoring the wonderful “Kilgen” pipe organ still played during performances.