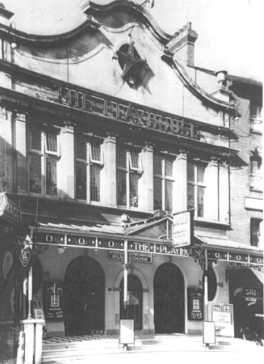 The Playhouse Super Cinema was opened on 14th August 1912 with "Treasure Island". The facade was in Bath stone, and had an attractive glass and metal canopy. Seating was provided in stalls and circle levels, and the stage was 17 feet deep. There was a luxurious tea room, for the convenience of patrons.

In 1929, it was taken over by Walter Bentley, and a Compton 2Manual/5Ranks organ was installed, with organist J.I. Taylor opening the instrument. The Union Cinemas chain took over in November 1935, and in October 1937, they were taken over by the Associated British Cinemas(ABC) chain.

The Playhouse Cinema was closed during World War II from 27th July 1940, and remained closed until it was refurbished and re-opened on 1st April 1946 by the Essoldo Cinemas chain.

The Playhouse Cinema was closed on 26th August 1962. It was demolished, together with the Compton organ in May 1963, and a supermarket was built on the site.

New photo added at photo tab at top of page