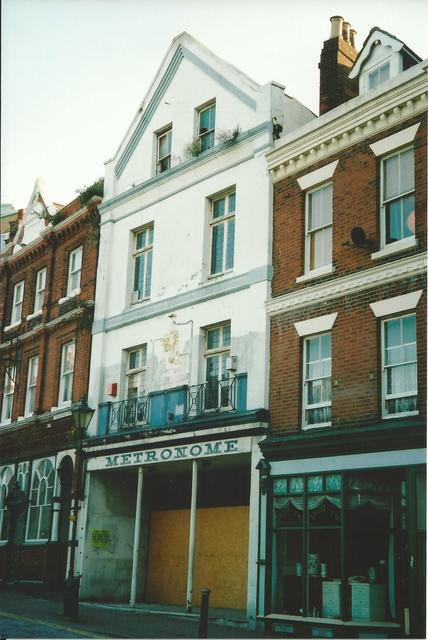 Originally housing a music hall, which became a garage, and then a skating Rink. The Electric Theatre was opened on 3rd May 1910. The conversion was designed by architect A.R. Bowles. Seating was provided for 400, all on a single floor. Patrons entered the auditorium from behind the screen, which was at the street end of the building. It was so successful that the owners employed A.R. Bowles to design their new much larger Playhouse Super Cinema in nearby Guildhall Street in 1912.

The Electric Theatre was re-named Savoy Theatre in around 1928. Disaster struck on 13th December 1928, when a fire began at the front of the building, destroying the entire structure.

It was re-built and re-opened as the Savoy Super Cinema on 20th June 1929 with Sir John Martin Harvey in "The Burgomaster of Stilemonde". The screen was now at the other end of the building, and the seating capacity had been increased to 932, with the inclusion of a balcony. The proscenium was 30 feet wide. Organist Percy Milton opened the newly-installed Dutch-built Standaart 2Manual organ. The auditorium ceiling was painted to represent a sky of azure blue, flecked with clouds. Many famous organists such as Reginald Foort, George Pattman and Frank Newman played the organ in the 1930’s.

The Savoy Super Cinema was closed on 27th July 1940, due to wartime conditions. It re-opened on 14th May 1941 with Arthur Askey in "The Ghost Train", Richard Arlen in "Hot Steel" and Edward O'Henry at the organ, plus variety on the stage.

Taken over by the Star Cinemas chain in the late-1950’s, they introduced part time bingo in October 1961, and soon after, it was closed as a cinema and became a Star Bingo Club. This had closed by 1987, and the building was unused. It was last used as a nightclub and live music venue named Metronome, which closed in the mid-2000’s. Since then part of the building has been converted into flats, but the auditorium remains unused.

It looks like the fate of this cinema is sealed. Planning permission has been submitted to convert it into flats. As always with Shepway District Council, it was done in a hush-hush manner and it would seem no objections were filed. The decision seems to be overdue.

Well, it may have had a reprieve. A property agent (who specializes in pubs) now have a to let sign on the front of the building! Their website suggests it is available freehold or leasehold.

When I lived in Folkestone it was known as Savoy bingo and then later became Rio bingo.The Standaart Organ was bought by a local cinema organ buff, Eric Hart, who installed it in his private house in Chart Road, Cheriton – an area of Folkestone.

My grandfather (Chris White) was the young manager of the Electric Theatre in 1919. A story in the local newspaper at the time reported a local war hero, Charlie Noakes, who was struck dumb with shell shock during the 1st World War and suffered other injuries. He was so overcome with emotion as he tried to laugh at a comedy film Her Movie Madness his power of speech returned. Amazed, he caused a stir as he cried out, “I have regained my speech….thank God,” then knelt down and prayed. Up to that time he was forced to communicate with the aid of a slate and some chalk.

With a little bit of help from Swale Council and the Lottery Heritage Fund some of this magnificent old building has been converted to flats. However, the theatre itself remains, although in need of extensive refurbishment. The owners are open to offers of funding to restore it to its former glory.

The auditorium contains a large illuminated circular dome in the ceiling fitted with coloured glass panels. The balcony ‘stepping’ is unusual in that it is constructed of moveable/removable interlocking cement blocks rather than cast in situ concrete stepping.

Jerry Morgan, who bought the Savoy from Star cinemas when it was on bingo, also ran De Luxe bingo situated at the bottom of Grace Hill (former Co-op store now demolished) and also ran bingo in a former Dover cinema (Essoldo). Both the Dover & Folkestone former cinemas operated under the name of Rio Bingo.