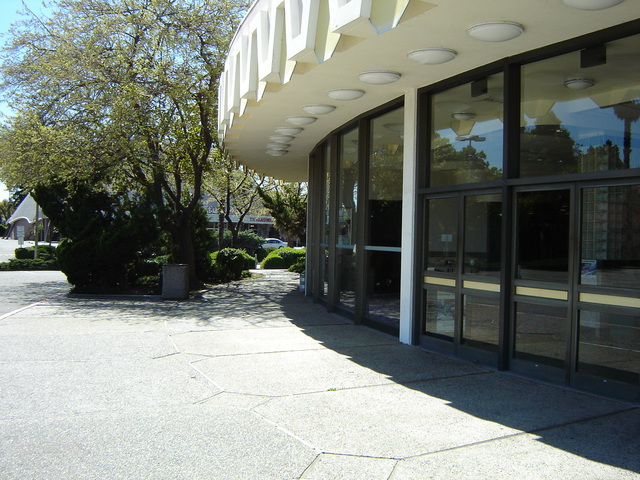 The San Jose Century 21 was opened November 24, 1964, with “It’s A Mad, Mad, Mad, Mad World”. The intention was of using the 3-strip Cinerama process; but it actually only showed 70mm.

The screen was later replaced with a flat model, but has remained intact as a wonderful throwback to the domed Cinerama palaces of the 1960’s. It was closed March 30, 2014.

Like the 24 and the 25, the 21, 22, and 23 are now closed and may be soon demo’d. Sunday night’s finale at the original and never multiplexed 21, presided over by Shannon Guggenheim and the Retro Dome repertory company, was attended by representatives of the Syufy family, the media, and over a thousand patrons. Completely sold out, it was a festive send-off (the audience even clapped to the beat of the old 1990s Syufy/Century Theatres trailer). However, the new leaseholder and the property owners appear intransigent. So it looks like The Block-San Jose may soon join Coronet-San Francisco, National-Westwood, Cinedome-Orange, Cinema 21-San Diego, and countless other nice California theatres so that there can be more of what we already have too much of here in this state.

It breaks my heart to see these theatres go. I was born in the early 1960’s in Santa Cruz, but grew up in San Jose. This is what my mother recently wrote about Century 21: “When Century 21 was new it was like going to a live theater. The big screen, the large, comfortable seats, it was comfortable to be there. Things changed over the years, but I think they set the bar.”

In the early 1980’s, I would work for Syufy as an Assistant Manager at Century Almaden (five-house theatre at Blossom Hill Rd and Almaden Expressway) for first Ron Giffen and later Kevin Payton. One of my duties was to set-up the marquee sign, a dangerous job to reach the top sections from a ladder up on the platform that was fifteen feet off the ground — sometimes in the rain. But I loved threading the projectors on the big platters to the five old Cinemeccanica reel-to-reel projectors between showings throughout the day, or turn up the sound in the projection booth to listen and watch my favorite parts of some movies.

I would help out occasionally on the Big Block, mostly for Ron Giffen at Century 23 or Bill Tannehill at Century 21. I met Ray Syufy Sr. once when he came to Century Almaden to decide whether to split the center big house in two, but he never did. Sometime later while working the door at Century 23 a younger man walked up and said he was Ray Syufy and he wanted to see the manager. I chuckled, since I had already met Ray Syufy. I went to the office and told Ron Giffen some guy said he was Ray Syufy and wanted to see him. Ron exclaimed, “That could be Ray Syufy, Jr.!” I was mortified.

Just this weekend, on 30 May 2014, I took my two daughters (8 and 6 years old) to a special Retro Dome showing of Walt Disney’s “Finding Nemo” at Century 21, where they enjoyed the huge screen instead of a television monitor on DVD — they loved it!

It is like saying goodbye to an old friend.

To celebrate, here’s a list of the Century 21’s bookings during its first decade as researched from their original newspaper promotion.

I saw so many films here over the course of literally five decades (from the early 1970s, through 2011)…probably the most “significant” would be the time in 1983, when my dad took me to see Kubrick’s “2001: A Space Odyssey,” during its 15th anniversary re-screening.

Fifty years ago today Kubrick’s “2001: A Space Odyssey” opened its exclusive Silicon Valley roadshow run at Century 21. It ended up running 87 weeks, making it the longest, continuous run of the film in the United States (and second longest in the world just behind Toronto’s 127-weeker).

I’m really happy with the fact that this theater’s become a landmark, but I really, really want it to remain a theater in some way.

Passing along the link to a 12-page 40th anniversary RAIDERS OF THE LOST ARK retrospective which features a historian Q&A and 70mm playdate chronology. The Century Domes get mentioned several times.