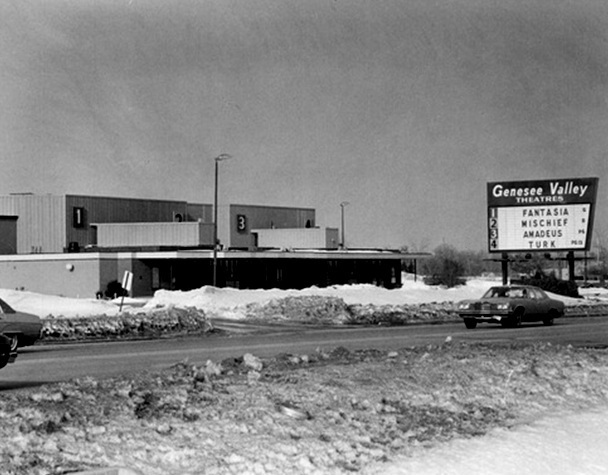 The Genesee Valley Twin Theatres was opened by Butterfield Theaters on September 2, 1971 with Sean Connery in “The Anderson Tapes” & Florence Henderson in “Song of Norway”. It became a 4-screen theatre on November 11, 1977. On May 17, 1991 it was expanded to 6-screens following it being sold to Kerasotes. On November 6, 1992 it was taken over by National Amusements. They closed the complex in 1996 following the opening of their larger multiplex nearby, and the Genesee Valley Theatres was torn down for a Best Buy.

Mike’s JAWS anniversary article has this theatre listed as a twin.

Google Map is over a mile off. It is Southwest of the Red Dot, a bit Northeast of Miller Road and Ketzeler Drive.

Opened as a twin by Butterfield Theatres, of Detroit, they had about 60 theaters all in Michigan.

Around 1985 bought by Kerasotes Theatres of Springfield, Ill. George Kerasotes, President, they had over 30 theaters in Illinois and Michigan. They split the original 2 theaters to make a total of 6 screens.

1997 closed by National Amusements when they opened Cinema 10.

I don’t know why Google Maps has such trouble with Miller Road. Do the numbers reset at some point?

This opened as the Genesee Valley Twin Theatres on September 2nd, 1971 by Butterfield Theatres, with “The Anderson Tapes” in the Red 1 and “Song of Norway” in the Gold 2. Grand opening ads posted.

On May 17th, 1991, the cinema was expanded to six screens before being purchased by National Amusements on November 6th, 1992 and closed in 1996.