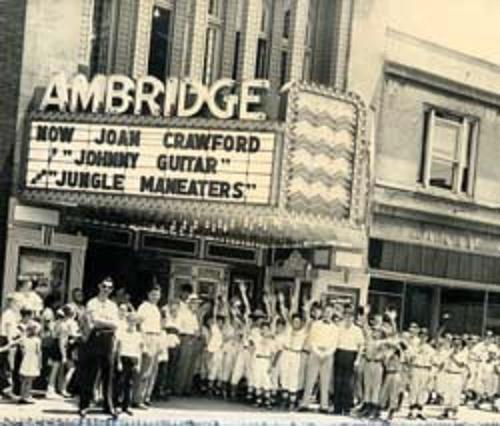 The Ambridge Theatre was operating prior to 1929. It was operated by Warner Bros. The theatre was closed and demolished in 1965.

The February 15, 1965, issue of The Film Daily said that a bank had taken an option on Stanley Warner’s Ambridge Theatre and that the house might soon be closed. It was the town’s only operating theater. Boxoffice of October 4 the same year said that the Ambridge Theatre Building would be razed sometime that month.

“Invasion of the Mind Snatchers: Television’s Conquest of America in the Fifties,” by Eric Burns, a native of Ambridge, said that the town had four theaters in operation at the beginning of the 1950s, but only two by the end of the decade.

I’ve found the Ambridge Theatre mentioned as early as 1929, so it was in operation by then.

As the Ambridge Theatre was apparently only house of ample scale in the town, it was probably the recently-opened theater that was mentioned in the January 14, 1929, issue of The Film Daily: