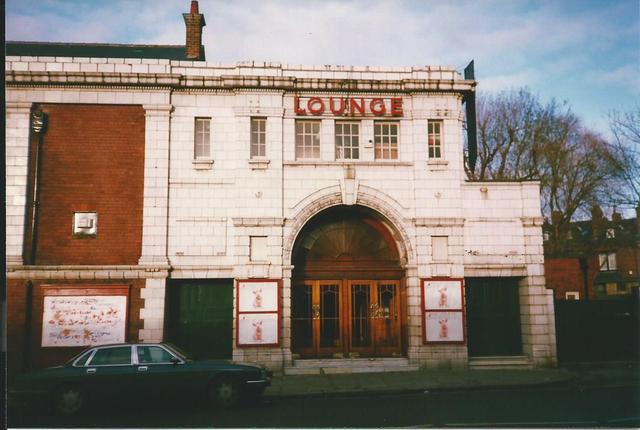 The Lounge Cinema opened on 2nd October 1916 and was run in conjunction with the nearby Cottage Road Cinema. In 1999 it had a major multi-million pound make over. A new extended foyer, new bars a nightclub and an attractive garden have been added to the existing cinema - the auditorium of which was extensively refurbished and upgraded.

It now boasts a huge screen up to 42 feet wide, new comfortable seating with great legroom, a bar from which you may take drinks into the cinema, Dolby Digital sound and advance booking available over the internet. All this without losing the charm of the 1916 original cinema!

Constructed of brick with an elaborate tiled entrance (and windows dressed with the same white faience), the Lounge Cinema originally had 831 seats, which over the years has gradually decreased to 483 providing extra comfort. The original stalls and balcony structure survives undivided however.

There was a Conacher Organ installed but this has now gone. It plays the latest blockbuster films and has a huge following in this upmarket northern suburb of Leeds with its large student population.

The Cottage Cinema (also in Headingly) has been saved from closure by Northern Morris Cinemas Ltd who own other cinemas in Northern England such as the Rex in Elland and the Regal in Lancaster.

The Lounge cinema should have never closed because Leeds has fewer cinemas.The Odeon in Leeds City Center closed and more…
I live in Bramley Leeds.The nearest cinemas to me are Odeon – Leeds and Bradford.And Warner Village Cinema which is now Vue Cinema.
I hope in the future someone from a cinema company buys it or the council turns it into a Cinema Museum.

I heard tell that plans to demolish the Lounge for a nightclub were ditched by the Council in Leeds, and quite rightly too. In the meantime, the building stands neglected and rather forlorn – I understand the interior was stripped out pretty much straight away after closure and it looks as if the exterior may not last much longer without being desecrated. Pity Charles Morris couldn’t have saved this cinema as well but greed seems to rule when it comes to the survival of these buildings, and the ATC were in the end only interested in the profits from their adjourning bar, The Arc.

Great ideas. But a single-screen of the SIZE of the Lounge couldn’t work with art-house movies. It was just TOO big for that. If it had been a twin then that would have had a reasonable chance – but the Hyde Park Picture House is only just over a mile away and it’s doing just that. It was a great place to see a movie, but just not practicable with the size and location. I think Charles Morris of Northern Morris cinemas would have seen this and reasoned that it would need a LOT of money to turn it into a twin and make it viable. Charles has done great things for cinemas in the north and it’s just gratifying that he saw the Cottage Road cinema, half a mile away,as being one which could survive.

It now transpires that within days of the cinema closing in January 2005, the interior was deliberately wrecked to prevent the cinema from being reopened and to preclude any attempt to have the building listed. With the seats and equipment still in place in the recently restored and up-graded building, the ceiling was brought down, the balcony front destroyed and the screen and proscenium plasterwork smashed.

Demolition of what remains is scheduled for the 94 year old building, to be replaced by offices and shops.

A poor quality negative of the interior of the Lounge, before the renovation:–

Does anyone know who owns the building? If it still is up or is for sale?