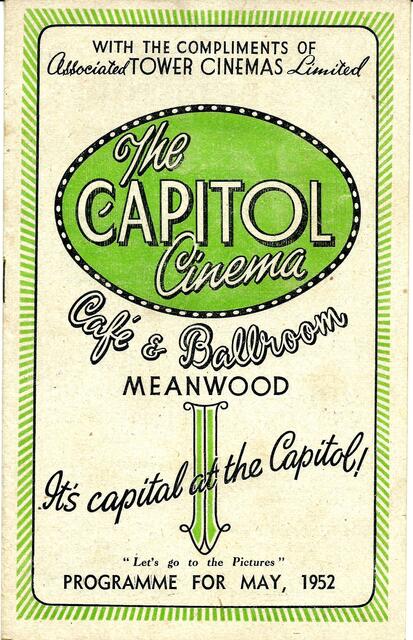 In the Meanwood district of Leeds, the Capitol Cinema was opened on Monday 27th November 1922 at 2pm by the Lord Mayor of Leeds, Alderman Frank Fountain, JP. The opening film was “The Prodigal Judge”, starring Jean Paige, which played Monday to Wednesday, followed by Gladys Cooper and Ivor Novello in “The Bohemian Girl” from Thursday to Saturday. The Capitol Orchestra was led by Leonard Buckle.

There were 1,294 seats, with 1,114 in the stalls and 180 in the gallery. The cinema was owned by The Meanwood Entertainment Syndicate Ltd., whose general manager was Tom B. Mercer. There was a billiard hall, café and the Capitol Ballroom.

By 1953, according to the Kinematograph Year Book, the proprietor was Associated Tower Cinemas and the seating capacity had reduced slightly to 1,266. The café and ballroom were still operating.

The Capitol Cinema closed on Saturday 27th July 1968 with Warren Beatty and Faye Dunaway in “Bonnie and Clyde”. The ballroom closed in the August, and was converted into the Cats Whiskers disco.

Mecca Bingo took over the cinema, but that closed at the end of 1979. Meanwhile, the Cats Whiskers had never really taken off, due to competition from city centre discotheques, so that also closed.

The building was demolished in early-1980. A Tesco store replaced it. It is believed that the site is now occupied by a Waitrose supermarket.