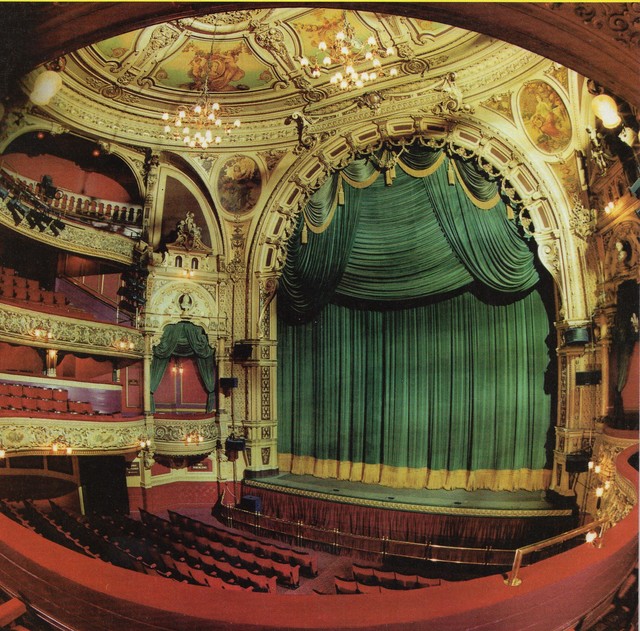 The Grand Theatre was opened on 23rd July 1894 with Wilson Barrett starring in “Hamlet”. Designed by noted theatre architect Frank Matcham, the Grand Theatre is said to be his ‘masterpiece’. The corner entrance has a small circular foyer. Above the entrance there is a dome and minaret.

Inside the auditorium seating was provided for 1,600 in pit, orchestra stalls, dress circle, upper circle and gallery. There are fine paintings on the ceiling, and around the 30 feet wide proscenium opening are twelve painted panels representing months of the year. The theatre has twelve dressing rooms.

Built for high class drama and musicals, in October 1908, the Grand Theatre was screening a ‘living pictures’ displayed by the British Bioscope. In 1909, the theatre came under the control of the Blackpool Tower Company.

The Grand Theatre was equipped to screen ‘talkies’ in 1930, and for many years became a full time cinema during the winter months. The seating capacity was given as 1,711 at this time. Summer months were taken over by a summer show, often starring Gracie Fields. Many other famous names have starred in productions at the Grand Theatre, including Sybil Thorndike, Flora Robson, Ivor Novello, Lupino Lane, Anton Walbrook, Rex Harrison, John Guigud, Edith Evans, Jessie Matthews, Alec Guinness, Vivian Leigh, Jean Simmons, and many many more.

After much debate and a fight to save the building by the Friends of the Grand Theatre, it was eventually refurbished and re-opened as a live theatre on 23rd March 1981 with the Old Vic’s production of “The Merchant of Venice” starring Timothy West and Prunella Scales. Full restoration was completed in 1994, in time for the theatre’s centenary.