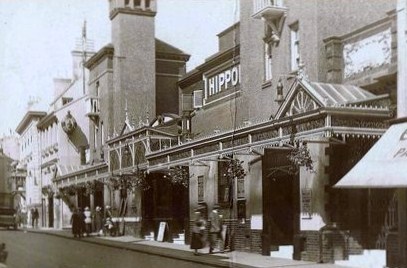 Located in the narrow Middle Street, off the main sea-front. The building was built in 1897 as the Real Ice Skating Rink, designed by architect Lewis Karslake. The rink was 90 feet across and was surrounded by a wide promenade. It was a short lived venture, and the owners brought in leading theatre architect Frank Matcham, to convert the building into a theatre/circus.

The front of the building was largely untouched, apart from making a central entrance. The ice rink was removed and became the site of the stalls seating and a circus ring. A stage was built at the rear of the building, which has a rectangular proscenium arch, flanked on each side by squat onion-domes. A balcony with tiered seating was built in a semi-circle around the auditorium, which was lavishly decorated in a Baroque style. The huge circular ceiling is richly decorated and gives an appearance of a panelled tent. There was also an elegantly decorated Palm Court area, which served as a bar.

The Hippodrome Theatre & Circus opened on 28th August 1901, with circus acts in the ring filling the first half of the programme, and variety acts on the stage presented in the second half of the programme. Unfortunately, this too was not a great success, and the theatre was put up for sale in October 1902.

It was purchased by Thomas Barrasford, who operated a chain of variety theatres, mainly in the north of England. Conversion into a variety theatre was carried out to the plans of theatre architect Bertie Crewe. It re-opened as the Hippodrome Theatre of Varieties on 22nd December 1902. The circus ring had now been made into a front orchestra stalls seating area. Films were screened as part of the variety programme from its opening until 1909, when purpose built cinemas began to spring up.

Many famous stars appeared at the Hippodrome Theatre over the years, including, in the early years:Sarah Bernhardt, Vesta Tilley, Harry Lauder, George Robey, Little Titch, and Wilkie Bard.

Towards the end, pop stars began to appear, such as The Beatles, Adam Faith, Cliff Richard & The Shadows, the Rolling Stones, Dusty Springfield and The Who.

The Hippodrome Theatre was closed in early-1964. There were plans to convert the building into a theatre-restaurant venue, similar to the Talk of the Town in London, but these came to nothing. In late-1964, the auditorium was used as a location for some scenes in the film “Be My Guest” starring David Hemmings and featuring several rock stars such as Jerry Lee Lewis.

Mecca took over the building, and it was converted into a Mecca Bingo Club, a use which continued until the early-2000’s. Since then the building has stood unused. Plans to convert into a casino were approved, and conversion work began, but were halted in 2011, possibly due to the recession. In the summer of 2013, plans were proposed to convert the Hippodrome Theatre into a 8-screen cinema, and these were approved (despite strong opposition) in September 2014, but the scheme was scrapped. The building remained vacant and was placed as Number 1 on the Theatres Trust list of Theatres at Risk. New owners Matsim took over in 2019 and in 2020 restoration/renovation work began to convert it back into an entertainment venue. Sadly, plans show that the stage house will not feature in these plans, so hopes of a live theatre use may have been dashed.

On 20th December 1985, the Hippodrome Theatre was designated a Grade II* Listed building.

The Hippodrome is at risk of demolition. Any signatures added to this petition would be appreciated.