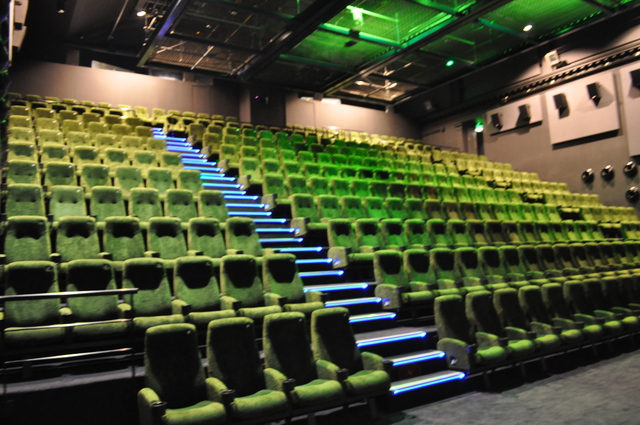 Located opposite Hackney Town Hall and the Hackney Empire Theatre, in this East-end of London inner city area. The Hackney Picturehouse opened on October 28th 2011, with “The Help”, “Tintin 3D”, “The Ides of March” and “We Need to Talk About Kevin”. Seating is provided for 294 in Screen 1, 124 in Screen 2, 116 in Screen 3 and 57 in Screen 4. There is a ground floor restaurant cafe/bar, a bar on the first floor, which also has an art gallery space, and the attic bar on the second floor, which also hosts live performances by comedians and live music. The Hackney Picturehouse is an all digital cinema. On display in the foyer is a Phillips DP70 projector which was originally housed in the projection box of the Empire Leicester Square, London. In 2016 a 5th screen with 59-seats was added to plans of architectural firm Earle Architects.

Operated by the Picturehouse/City Screen chain of cinemas, it is housed in a building which was originally constructed in 1907 as the Central Library and Methodist Hall. In the early-2000’s, it was remodeled into the Ocean, a live music venue. However after a shakey start and some gang violence it was closed around 2005.

The opening of the Picturehouse brings cinema back to the heart of Hackney, something it has lacked since the closure of the ABC on Mare Street in 1994.

The Hackney Picturehouse has had 5 screens for some time now. The fifth is to the left of the cafe bar and up the stairs and is a similar size to that of Screen 4. Occasionally films are also shown opposite The Attic bar when part of a film festival.

The Picturehouse now has a lounge screen with low seating for about 24 people. The space is upstairs at the front of the building and the windows have been covered with thick curtains.

The Lounge Screen is now known as Screen 6 and has proper seats.