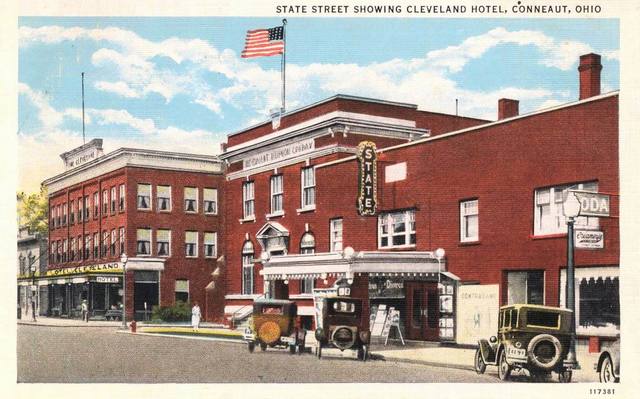 This theatre was on the north side of State Street on the right side of the telephone company building which still stands. The State Theatre was a few doors west of the Ohio Theatre, and it opened in late-1925. It was closed in April 1967 with Kenneth Williams in “Carry on Screaming!”. It was demolished in early-1972.

A one-storey annex of the Telephone Company building now occupies the site of the State Theatre. David B. Owens' book “Conneaut” (Google Books Preview says that the State was closed and demolished in 1966. The address of the original telephone building is 228 State Street, so the adjacent theater’s address would have been approximately 224 State.

An aerial photo on page 67 of Owens' book shows that the State Theatre had a stage house, while the Ohio Theatre at the east end of the block did not. The State was probably the older of the two theaters. Page 74 of the book has both exterior and interior photos of the State Theatre.

The January 5, 1926, issue of The Film Daily said that the State Theatre in Conneaut had opened.

The State Theatre closed around 1966 but was not torn down until early 1972. One of its projectors and other memorabilia are on display at the Conneaut Area Historical Society building.