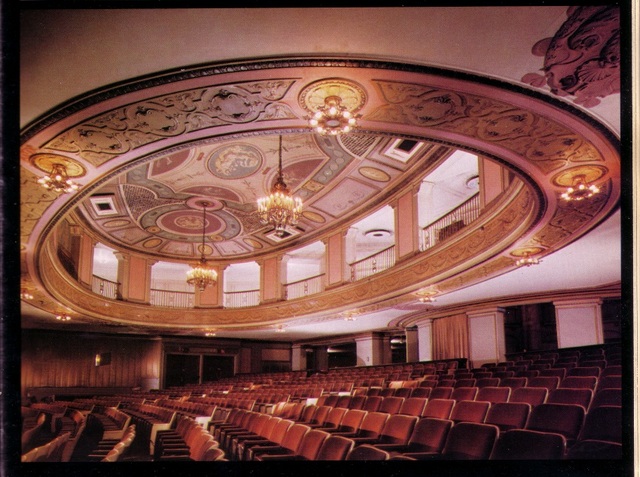 The Allen Theatre opened as a movie palace in April 1921 with Vera Gordon in “The Greatest Love”. It was designed by C. Howard Crane, and could seat around 3,000, making it Cleveland’s largest movie theatre at that time. For several decades, the Allen Theatre served as one of the grandest places in the city to see a motion picture, before falling into decline in the 1950’s and 1960’s. It was finally shuttered in 1968, and was only spared at the last minute from being bulldozed for a parking lot. Workers had already begun dismantling the interior when the word came to halt demolition.

In an effort to bring the Allen Theatre’s plight for preservation to the forefront of Clevelanders, the Playhouse Square Association (which was formed in 1970) reopened the Allen Theatre in 1971 for a concert by the Budapest Symphony Orchestra. For a year, a series of concerts and appearances by celebrities like Richard Harris and Lily Tomlin, were presented at the Allen Theatre.

As one of the components of Cleveland’s famed Playhouse Square, the Allen Theatre was fully restored to its 1920’s splendor. It original rather small stage house was demolished and a new stage house was built. It was now primarily used as a venue for touring Broadway shows and other live acts requiring a large stage.

The historical architecture remains and is partly visible behind the skeletal walls of the new performance space in the front part of the main auditorium. The balcony was walled off and remains behind the large sheetrock wall with only minimal damage. The two new performance spaces are in a new building adjacent to the Allen Theatre, connected by a walkway that comes into the existing walkway connecting the Allen Theatre with the Ohio Theatre.

The new constriction was designed to be reversible allowing for restoration of the original space.

However, in 2012, in what could be described as an act of sheer wanton vandalism, the auditorium was divided up into smaller auditoriums seating 514, 150 and 348. Sadly gone is the lavish Italian Renaissance style interior with its ‘heavenly’ ceiling mural and fine fixtures. Replaced by functional modern performance spaces.

This webpage includes a photo (click upon it to enlarge it) which shows how the Allen’s auditorium has been remodeled (I would indeed say desecrated) to meet the needs of the Cleveland Playhouse:

Holy shit. That really is desecration.

Divided up into smaller auditoriums- http://blog.cleveland.com/architecture/2012/08/renovated_allen_theatre_at_pla.html

From the cited article: “An earlier renovation of the Allen in the 1990s by Playhouse Square preserved much of Crane’s design, but the organization decided this time around to sacrifice historic flavor in order to serve up the functionality desired by the Play House and CSU.

Bottom line: The new high-tech look at the Allen, which allows the original architecture to peek through here and there, was a fair price to pay for a theater that now works so well."

Appalling! Fortunately, from what I can see, much of the original look can be restored (which I hope it will be after a few money-losing seasons of the Cleveland Playhouse proves what boondoogle this was. I have lost all respect for the Playhouse Square Association.

Hi rivest266, please email me at Thank you

This theatre was owned and built for the theatre owning ALLEN family of TORONTO, Canada. Rapid over-expansion in the twenties caused the ALLEN THEATRES to go into receivership both in Canada and the United States. Their main competition in Canada, Famous Players Canadian Corporation squeezed them right out of business. The Allen family remained on as an operating partner of Famous Players right up until the mid-70’s!!!

does anyone have a Marquee picture (the year is inconsequential, but I am a child of the 1955-69)downtown Cleveland theater-wise, and have almost assembled marquee pictures of all my youthful haunts and memories……if someone wants to share, ……I remembering going there to view “The Fall of the Roman Empire”, but later, missing the opportunity to see/hear THE WHO w/opening act JAMES TAYLOR….my date and I went to see “Little Big Man” at one of the other venues…..Stupid is as stupid does !

BigDog: Click on the “Photos” button above the photo at the top of this page. 81 photos of the Allen have been uploaded here so far, a few of which show the marquee.

In the late 50s and early 60s the beautiful Allen had long runs of GIANT, AUNTIE MAME, ANATOMY OF A MURDER, A SUMMER PLACE, THE MUSIC MAN, GYPSY and BYE BYE BIRDIE. Great stuff.